Why Betting the Under on the Chiefs Win Total Makes Sense 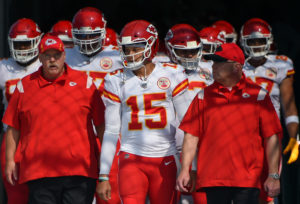 The Kansas City Chiefs have won the last six straight AFC West titles and they have had double-digit wins in each of their last seven seasons. Kansas City has won 11-plus games in six of the last seven NFL seasons. Getting to 11 this season is going to be much more difficult. That’s why bettors should consider the Under on the Chiefs’ regular season win total which is set at 10.5.

The Chiefs’ offense regressed a little in 2021 but was still one of the best in the NFL. Kansas City finished third in total offense (396.8 ypg) and fourth in scoring (28.2 ppg). Patrick Mahomes threw for 4,839 yards and 37 touchdowns and TE Travis Kelce was a machine. The All-Pro had 92 catches for 1,125 yards and nine touchdowns.

The Chiefs’ leading receiver, Tyreek Hill, is now in Miami. The Chiefs did bring in three receivers – JuJu Smith-Schuster among them – in the offseason and they drafted Skyy Moore out of Western Michigan. Still, the Chiefs’ offense was better with Hill in it. Some regression may continue in 2022.

The defense lost safety Tyrann Mathieu, a huge blow to a unit that improved as the 2021 season went on. The Chiefs allowed 29 or more points in their first five games last season, but they had a late-season stretch of eight wins in a row. In seven of those eight victories, the Chiefs’ defense allowed 17 points or less.

Despite that success, the Chiefs still finished in the bottom 10 in the NFL in defensive efficiency. They were ranked 27th against the pass and finished 27th in total defense (368.9 ypg). Kansas City drafted four defensive backs and brought in safeties Deon Bush and Justin Reid in the offseason.

The bigger problem for the Chiefs is the team’s schedule. The AFC West Division is regarded as the NFL’s toughest this season. The Chiefs, Chargers, and Broncos are all among the top five or six favorites to win the Super Bowl this year. Denver, of course, traded for QB Russell Wilson. With their defense intact, Wilson makes the Broncos a legitimate contender.

QB Justin Herbert is a rising star in the league and the Chargers shored up their defense by adding former NFL Defensive Player of the Year Khalil Mack in the offseason. Even the Raiders, who went 10-7 and made the playoffs last year, will be better in 2022. Las Vegas added WR Davante Adams who is reunited with his college quarterback, Derek Carr.

Kansas City will cross over and face the NFC West. That means games against San Francisco and the defending Super Bowl champion Los Angeles Rams. If that isn’t enough, the Chiefs will play at Super Bowl loser Cincinnati and they will face 2020 Super Bowl champ Tampa Bay on the road in October.

With a schedule like that, getting to 10 wins is going to be hard enough. Winning 11 and going Over the win total seems highly unlikely.