Who Leaves the Big House Undefeated – Penn State or Michigan? 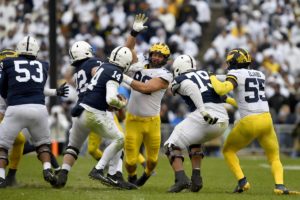 My math model favors Michigan by 9.6 points in this game and the Nittany Lions have lost fifteen straight games as road underdogs versus Top 5 teams. Under head coach James Franklin, Penn State is 2-13 straight-up versus Top 10 teams, including 0-9 since upsetting Wisconsin in the 2016 Big Ten Championship game. The past two times Penn State traveled to the Big House (with fans in the stands), they lost by a combined 91-17. Let’s also note that Penn State is 2-6 ATS versus Michigan under coach Franklin, and 0-5 ATS as an underdog.

Quarterback J.J. McCarthy and running back Blake Corum have been instrumental in an improved Michigan offense that excels at staying on schedule, ranking fourth in standard down success rate. Michigan has scored on 59% of its drives, fifth-best in FBS entering Saturday’s game against Penn State.

The line of scrimmage remains Penn State’s biggest weakness, and the Wolverines are built to exploit it. Penn State’s ground attack is led by freshman Nicholas Singleton, who ranks fifth in the country in yards per carry (7.3) among 143 FBS players with at least 60 carries. However, Singleton ranks 111th in first downs per carry (21%), while the Nittany Lions rank 102nd in rushing success rate. Despite losing Aidan Hutchinson and David Ojabo to the NFL draft, the Wolverines rank seventh nationally in rush yards allowed per game (81.7) and sixth in yards per rush (2.62). Michigan has allowed 0.97 points per drive, the seventh-fewest in FBS.

Michigan’s defense is one of the best in the nation at preventing big plays and has recorded fourteen sacks in its past three games. Penn State quarterback Sean Clifford has not been near as mobile this season as he has been, rushing just 26 times in five games (mostly in short-yardage situations).  The fifth-year signal-caller has more turnover-worthy plays than big-time throws this season and has posted the lowest average-depth-of-target number of his career.

Michigan is one of the most well-rounded teams in the country, ranking ninth in defensive SP+, eighth in offensive SP+, and third in special teams.