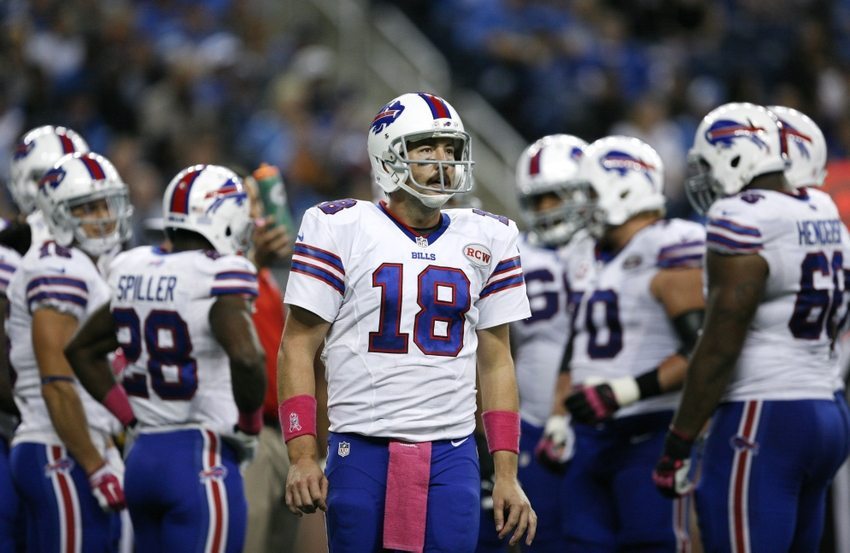 Buffalo seems to be a different team with Kyle Orton under center as the Bills have won three of his last first four starts to improve to 5-3 on the season.  “I don’t know yet because it’s still such a young season, but I think it’s very promising the way he’s prepared himself, the way he’s handled himself,” offensive coordinator Nathaniel Hackett said of Orton.  Rookie wide receiver Sammy Watkins has also been impressed with what Orton has brought to the field.  “He’s a leader,” Watkins said. “He makes the passes that he needs to make.  He knows how to help us out on the field, put us in different areas.  That’s what we need, a veteran quarterback.”

I also like the way Buffalo’s offense is operating with Orton behind center as the Bills are averaging 27.3 points over the last three games at 7.5 yards per pass play, 5.7 yards per play and 12.1 yards per point.  There is no questions that Buffalo is a much better team with Orton guiding the offense, and I expect that success to continue Sunday afternoon against a grossly overrated Kansas City stop unit.

From a technical standpoint, Buffalo is 8-2 SU and ATS at home versus non-division opponents when playing with rest, 6-1 ATS in this series and 6-1 SU and ATS in its last seven meetings at home against the Chiefs.  This also seems to be the sweet spot of the regular season for the Bills as they are a profitable 24-10 ATS at home in weeks 10 through 13.  With Andy Reid standing at 1-4-1 SU and 1-5 ATS versus rested opponents in his NFL career, grab the point(s) with Buffalo and invest with confidence.  We hope you enjoyed this NFL betting preview!

If you enjoyed this NFL betting preview, be sure to check back on a daily basis for additional handicapping analysis and free sports picks from Oskeim Sports.