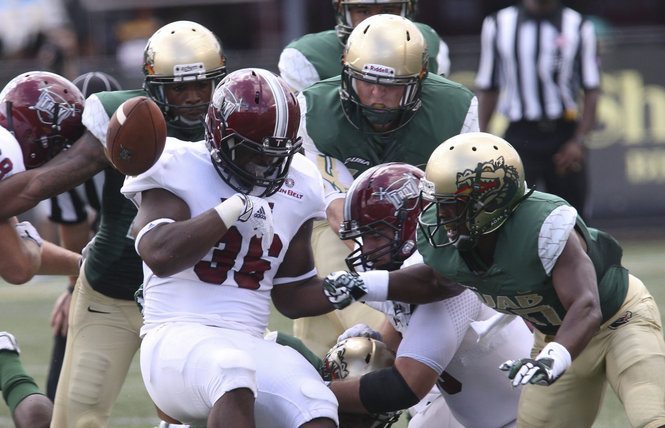 UAB has only reached the 5-win mark once over the last eight years so most sports bettors simply overlook the Blazers on a regular basis.  However, with fifteen returning starters and the arrival of new head coach Bill Clark, who previously led Jacksonville State to a school-record 11-4 campaign in 2013, the Blazers are playing with renewed focus and enthusiasm.  In fact, UAB is 3-2 SU and ATS this season, including an impressive 42-39 upset road win over Western Kentucky last week as nine-point underdogs.

The Blazers have won the statistics in each of their first five games this season, including outgaining Mississippi in Week Two as 29-point underdogs (47-34 loss). Clark has done a terrific job with a UAB program that was thought to be in a rebuilding stage this season as the Blazers are +110 yards per game entering Saturday’s conference game against North Texas.  Let’s take a look at how both of these teams match-up with one another from the line of scrimmage:

The Blazers have been 0.2 yards per play better than average defensively this season, allowing 5.4 yards per play to teams that would combine to average 5.6 yards per play.  While only slightly above-average, UAB’s stop unit is good enough to limit a mediocre North Texas offense.  I also like the fact that UAB is limiting opponents to just 32 percent on third-down conversions. Jake Ganus (25 tackles) and Diahee Watkins (21 tackles) are the bedrock of the Blazers’ defense, combining for 10.5 tackles for a loss and five sacks.

North Texas is coming off a successful 2013 campaign wherein it was 9-4, but the Mean Green benefitted from a +10 turnover margin (extreme positive variance) and are now without their starting quarterback, a 1,000-yard rusher, two of their top three receivers and the best five tacklers on the team.  This game has blowout written all over it – lay the points with UAB and invest with confidence.