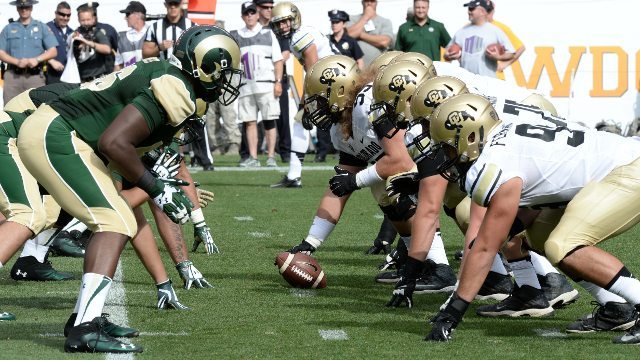 Both of these teams are heading in the right direction as Colorado won four games last season after going a combined 4-21 in the previous two years. Similarly, the Rams played in a bowl game for the first time in five years and defeated Washington State in what can only be described as a miracle comeback. The resiliency demonstrated by head coach Jim McElwain’s squad was impressive in that they trailed 35-13 and 45-30 before ultimately winning with a field goal at the end of regulation.

Colorado State’s offense is led by returning quarterback Garrett Grayson, who threw for 3,696 yards with a 62.1% completion rate in 2013 (23-11 ratio). Grayson averaged 7.2 yards per pass play against teams that would combine to allow just 6.8 yards per pass play last year, while also setting a school record for pass yards in a season. The loss of running back Kapri Bibbs is certainly significant in that he garnered 1,741 yards at 6.2 yards per rush attempt last season, but my math models still project Colorado State’s offense to be 0.2 yards per play better than average in 2014.

The Rams defense is anchored by defensive end Cory James, who registered eight sacks last season and returns for his junior year. The strength of Colorado State’s defense is its linebacking unit that returns its top three tacklers from last season – Max Morgan, Aaron Davis and Cory James. In fact, the Rams could have one of the best group of linebackers in the Mountain West Conference this season. Colorado State’s also boasts a rapidly-improving secondary that returns all four starters from last season and seven of its top eight performers overall. Indeed, four members of the secondary started at least ten games in 2013, and I expect continued improvement from this unit moving forward.

The key to this game could come down to Colorado State’s elite special teams unit, which is lead by place kicker Jared Roberts, who became the school’s most accurate kicker after making 21-of-24 field goals last season.  I project Colorado State’s special teams to be one of the best in college football.  I also give the coaching edge to the Rams as coach McElwain has done a great job with the program since arriving in Fort Collins in 2012. McElwain was Alabama’s offensive coordinator from 2008 to 2011 and has the credentials to make the Rams a legitimate title contender in the Mountain West this season.

Meanwhile, Colorado’s offense is expected to regress without leading wide receiver Paul Richardson, who averaged 9.7 yards per pass reception last season and was quarterback Sefo Liufau’s favorite target. In fact, Liufau threw in the direction of Richardson 37% of the time in 2013, and I don’t know where the Buffaloes’ will make up that production in 2014. From a technical standpoint, Colorado is a money-burning 2-7 ATS as favorites of five or less points and 3-10 ATS as favorites in Game One, whereas the Rams are 3-1 ATS in their last four games as non-conference underdogs of seven or less points. Take Colorado State plus the points and invest with confidence.