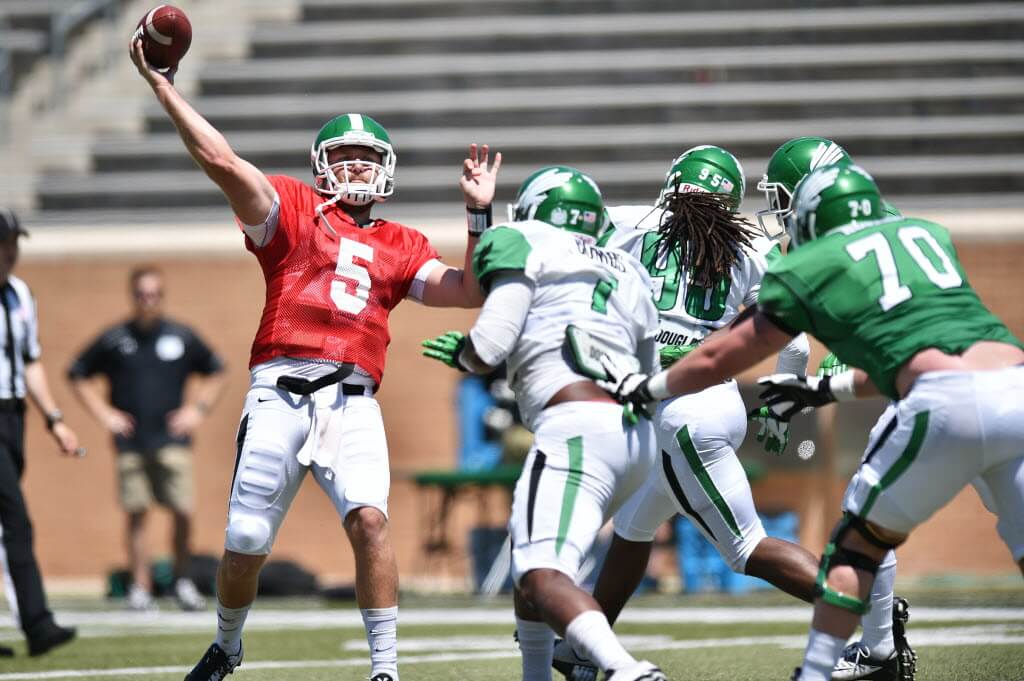 Following a dreadful 1-11 season, tied for the second worst in school history, North Texas had no choice but to find a competent head coach to change the program’s culture. NorthTexas accomplished that goal by hiring former North Carolina offensive coordinator Seth Littrell, who is regarded as having one of the most innovative offensive minds in college football.

In fact, players are referring to the new offensive scheme as the “3-plays-a-minute offense,” which is what North Carolina averaged per minute of possession under Littrell.

The Mean Green should have success moving the chains against woefully inadequate SMU defense that allowed 505 yards per game at 7.2 yards per play to teams that would combine to average just 5.8 yards per play.

North Texas should also have a 1,000 yard rusher in Jeffrey Wilson, who led the team last season with 850 yards at 5.4 yards per rush attempt.  Wilson will be running behind a vastly improved offensive line that returns 71 career starts.

SMU switched to a 4-2-5 under defensive coordinator Van Malone last year and the results were less than stellar as the Mustangs’ front seven yielded 261 rushing yards per game at 5.8 yards per carry!

I don’t expect to see much improvement along SMU’s defensive line following the departures of both starting defensive ends and defensive tackle Zach Wood.  The Mean Green’s veteran offensive line should have success controlling the line of scrimmage in this game, allowing Wilson to find ample running room in what should be a 100+ yard performance for the junior.

My math model only favors SMU by six points in this college football game and the Mustangs are 4-21 SU in their last 25 road games when favored by more than seven points.  Let’s also note that SMU lost its road games by an average of 29 points per game in 2015, with the closest loss being 19 points!

The Mustangs are 3-9 ATS in their last twelve non-conference affairs and 3-7 ATS in their last ten September games, whereas North Texas is 13-6 ATS in its last 19 home games and has a renewed sense of purpose entering the 2016-2017 college football campaign.

With North Texas standing at 4-2 ATS as a home underdog and 3-1 in its last four home openers (winning by an average of 33 points per game), take the rejuvenated Mean Green as Oskeim Sports’ Free College Football Best Bet and invest with confidence.