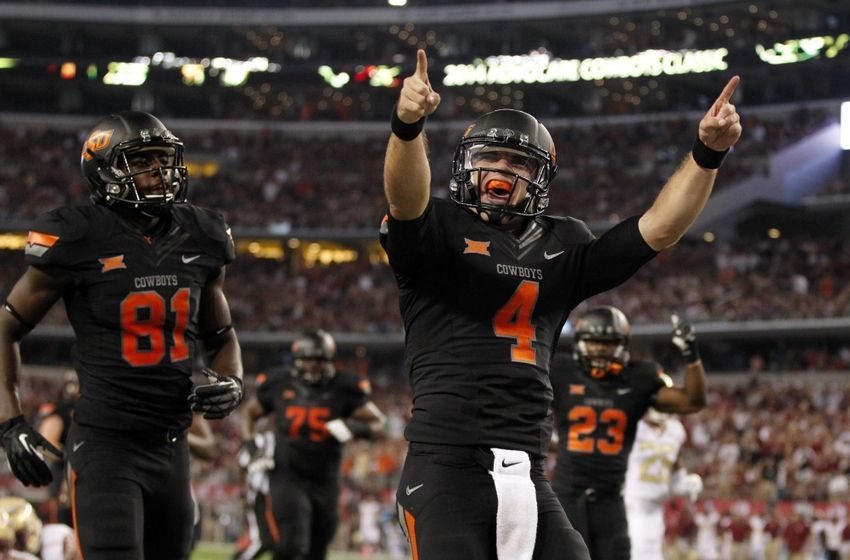 Oklahoma State returns to Stillwater for Homecoming after suffering a humiliating 42-9 loss at TCU in a game in which the Cowboys failed to score at least twenty points for the first time in 59 games.  Homecoming should bring out the best in Oklahoma State as the Cowboys have won six of their last seven in these circumstances.  Let’s also note that the Cowboys are a profitable 28-14-1 ATS as home favorites, including 11-4 ATS versus conference opponents.  Oklahoma State has also covered the point spread in eight of its last eleven conference home games.

The technical analysis also favors the Cowboys as they are 8-2 ATS after allowing more than 40 points in their previous game, 14-4 ATS after failing to cover the point spread, 13-4 ATS in their last seventeen home games and 21-9 ATS following a loss by more than 20 points, including 21-4 ATS at home since 1990.  In contrast, West Virginia is a money-burning 2-5 ATS following a win, 4-12 ATS on artificial turf, 1-6 in its last seven conference games and 1-7 ATS in its last eight October games.

After upsetting Baylor last week as 8-point home underdogs, the Mountaineers find themselves in a huge letdown spot on Saturday, and that assertion is substantiated by the fact that college football road teams that defeat 5-0 or better opponents as underdogs are just 35-53-1 ATS since 1980.  With Oklahoma State standing at 17-4 ATS at home versus elite opposition – those owning win percentages between .600 and .750 – take the Cowboys and invest with confidence.

Oklahoma State’s Off-Field Issues: Two Oklahoma State college football players were arrested early Sunday morning after allegedly falling asleep at the wheel in the drive-thru of a fast-food restaurant.  Redshirt sophomore receiver Jhajuan Seales and true freshman cornerback Juwan Offray were arrested on complaints of public intoxication after allegedly being found asleep in a car in the drive-thru lane of a local Whataburger at 4 a.m. on Sunday morning, according to local reports.  Seales, a starter, is the Cowboys’ fifth-leading receiver with 13 receptions for 236 yards and three touchdowns this season.  Offray is a backup cornerback who has recorded three tackles in 2014.