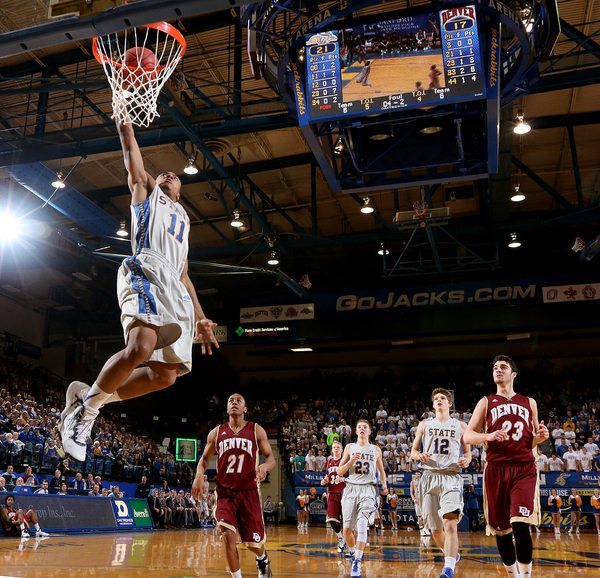 The Jackrabbits remain one of the most underrated and undervalued teams in college basketball despite their 9-1 record this season, which includes upset road wins over Illinois State, TCU and Minnesota. Indeed, South Dakota State is 35-16 ATS in its last 51 games overall, including 6-1 ATS in its last seven non-conference affairs.

Overall, the Jackrabbits are 7.1 points per game better than average offensively behind an extremely well-balanced roster that has had four players score in double-figures in eight of their ten games this season. The loss of guard George Marshall is certainly significant in that he was the Jackrabbits’ second-leading scorer with 12.9 points per game before suffering a foot injury on December 2. But, senior guard Deondre Parks has stepped up his leadership role in Marshall’s absence by being named Summit League Player of the Week after leading the Jackrabbits to wins over Minnesota and UC Santa Barbara.

“In the absence of George, Deondre has really focused his attention on being the leader on both ends of the floor and it has helped an entire tram play well,” head coach Scott Nagy said. The 2015 college basketball Summit League Newcomer of the Year averaged 22 points and 5.5 rebounds per game over the two games, and has made 34 consecutive free throws. 6-5 senior guard Keaton Moffitt scored a career-high 11 points against Santa Barbara in his second straight start. Mofffitt also led the Jackrabbits with eight rebounds and with six assists in Marshall’s absence.

South Dakota State’s backcourt is also anchored by 6-4 senior Jake Bittle, who six averaging 12.6 points per game on 61.5% shooting from the floor and 52.2% from three-point territory. Bittle is considered one of the Jackrabbits’ best defenders as he compiled a team-high 41 steals last season and already has nine thefts this year.

South Dakota State’s depth is best epitomized by forward Mike Daum, who has been described by coach Nagy as the best shooting big man he has ever coached. Daum is the team’s fourth-leading scorer with 12.0 points in just 16:36 minutes per game. In fact, the super-talented redshirt freshman has scored in double figures in seven games this season, all off the bench.

While the focus will be on Marshall’s absence, South Dakota State has an extremely deep and talented backcourt that is more than capable of filling in the gaps. In fact, the Jackrabbits won their first two games without Marshall last week – blowouts over both Minnesota (84-70) and Santa Barbara (86-68).

One of the keys to South Dakota’s fast start to the 2015-2016 college basketball season has been its solid play at the defensive end of the floor where the Jackrabbits are limiting opponents to 64.3 points per game on 37.2% FG and 30.7% 3-PT. Over its last five games, South Dakota State has allowed just 64.2 points on 37.9% FG and 30.2% 3-PT. Coach Nagy was concerned during the offseason about his team’s defense after losing top big man Cody Larson (13.9 ppg; 7.2 rpg), but the Jackrabbits have risen to the occasion in 2015.

Texas Tech averages 25 three-pointers per game and only makes 27.8% of those shots, and I expect the Red Raiders to continue to struggle beyond the arc against South Dakota State’s outstanding perimeter defense. Overall, the Jackrabbits possess a nominal 0.8 points per game advantage at the defensive end of the floor in this game.

Texas Tech owns a very good defense that is allowing 66.4 points per game to teams that would combine to average 77.2 points per game, which gives the Red Raiders a 3.7 points per game edge over South Dakota State’s potent attack. Texas Tech’s frontcourt took a hit with the loss of 6-10, 235-pound center Isaiah Manderson, who started four games last year and is out due to personal reasons.

My math model actually favors South Dakota State by a nominal amount so we are getting excellent line value together with the strong fundamental and technical analysis. Grab the points in this college basketball game and invest with confidence.