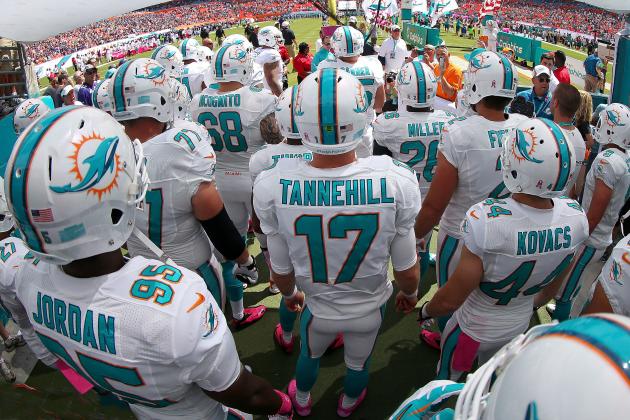 The knee-jerk reaction by most football bettors is to think that Green Bay is the better team in this contest and should be favored by more than a field goal.  Green Bay is coming off an impressive 42-10 win over the Vikings, but that result is actually bad news for the Packers in that non-division road favorites off a Thursday Night win are just 6-17 ATS in their next game.  The Dolphins are also 9-4-1 ATS at home and possesses the better team on both sides of the ball.

“I wanted to come out and personally play better,” said Tannehill, who recorded a lousy 74.1 passer rating through the first three games.  “My teammates demand that from me and they expect that from me, and to finally come out and do that felt good.” Tannehill is the beneficiary of an outstanding Miami ground attack that is 0.8 yards per rush play better than average this season.  Better yet, the Dolphins are averaging an incredible 166 rushing yards at 5.7 yards per carry at home this season. Running back Lamar Miller is fifth in the league with 5.7 yards per carry, and the expected return of Knowshon Moreno further bolsters Miami’s backfield.

“The bye came at a pretty good time,” Miami wide receiver Mike Wallace said.  “It’s going to be good for our team.  We haven’t seen these guys together like this in a long time. I’m excited; I know our whole team is excited.”  Safety Reshad Jones and Pro Bowl center Mike Pouncey are also expected to make their season debuts.  The matchup could not be better for Miami as the Packers run defense is 0.1 yards per rush play worse than average (4.6 yards per carry to teams that would combine to average 4.6 yards per carry), which gives the Dolphins a significant 0.9 yards per rush play advantage on the ground.  Green Bay is allowing a league-worst 163.0 rushing yards per game this season.

The favorable fundamental matchup in this game is relevant in that the Dolphins are a profitable 8-1 ATS at home when rushing for 5.0 or more yards per attempt over the last three seasons.  Miami is also 15-7 ATS versus teams with a winning record and 10-4 ATS in its last fourteen home games, including 5-1 ATS versus opponents with a winning record.  With Miami standing at a perfect 6-0 ATS as a home underdog over the last three years, take the Dolphins to win the game outright and invest with confidence.