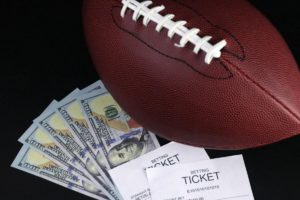 Bettors looking for more success this season with NFL and CFB bets must understand the point spread. When it comes to betting football, the point spread is the king of all bets. Each week, oddsmakers set point spreads for all of the NFL and NCAA games on the schedule. Betting these games can seem tricky, but understanding point spreads can help bettors have success.

Oddsmakers use their own mathematical models to calculate the perceived differences between two teams. They will add in external factors such as playing at home, the weather, and injuries. In the end, they come up with a number that levels the playing field between the two teams. This is the point spread.

Generally, oddsmakers begin calculating point spreads long before a season starts. These professionals build their own mathematical ratings system for NFL and NCAA football teams. Throughout the season, they will tweak these ratings, but these are used to help establish point spreads. Once an opening line has been released, it can be adjusted as it is affected by those same external factors as well as by the bets coming on the game.

Remember, sportsbooks are in the business of making money. Ideally, they would like to bring in equal action on both sides of a bet. Point spreads can be adjusted to encourage (or discourage) bettors on one side of a bet. Understanding these changes in point spreads can help bettors as they wager on NFL and NCAA football.

With this in mind, it’s pretty easy to see why NFL point spreads are usually set at 2.5, 3, 3.5, 6, 6.5, 7, and 7.5. Understanding these key numbers can help a bettor win more when betting against the spread. For example, bettors would recognize the value in an underdog at +3.5 instead of +3. More games end with a margin of 3 points than 4.

In 2015, the NFL changed its extra point rule. The PAT kick would put the ball at the 15-yard line making the kick roughly 33 yards. As a result, NFL kickers now make just 93 percent of extra points compared to 99 percent before the rule change. That is significant for NFL bettors because there is now more value on a favorite at -6.5 and an underdog at +7.5.

Knowledge is power in football betting. Understanding as much about point spreads as possible can help bettors win more often.