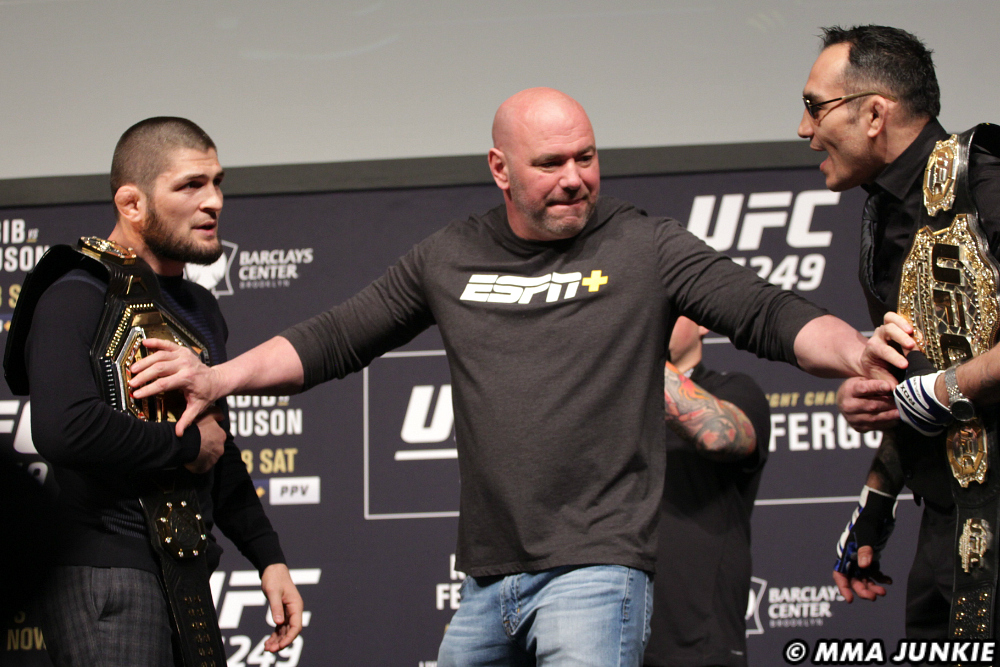 Despite all the controversies created by the Coronavirus, Dana White has managed to keep UFC 249 alive. The event is set to take place on Saturday, April 18, 2020, at Tachi Palace, California, US. In the main event, we will see a thrilling matchup between Tony Ferguson and Justin Gaethje for the Interim UFC Lightweight belt.

With 17 post-fight bonuses between these two, fans have many reasons to tune in watch this bout. Although Gaethje accepted this fight on 2 weeks short notice, many think he has all the tools to defeat Ferguson. He is coming off the three KO finishes and is more than happy to make the most out of this big moment.

Tony Ferguson is at the peak of his prime and has been looking unbeatable in previous fights. He is on the 12 fight winning streak and hasn’t tasted defeat in over six years. As you would expect, he is coming into this fight as a huge favorite.

Ferguson spent his entire fight camp preparing for Khabib who is an elite wrestler. Now he needs to switch his game plan and mindset on facing a dangerous striker.

What’s more, Gaethje is one of the best kickboxers in the lightweight division. He is always marching forward and putting strong pressure on his rivals. He is mainly known for throwing leg kicks with perfect technique and huge power. Also, his boxing skills are very good, and he can put people to sleep with a single touch.

Further, Gaethje is a volume striker and has a very good accuracy of 55%. Yet, his standup defense has a lot of holes and he absorbs around 9.6 strikes per minute on average. This represents a huge problem since Ferguson is more than capable to capitalize on this.

Ferguson is a very dynamic striker and he fights at a very high pace. He comes in with a six-inch reach advantage and 45% striking accuracy. His standup style is a blend of various combat techniques. However, he mostly relies on vicious Muay Thai skills.

He is a very unpredictable striker and uses high agility to land strikes from awkward angles. Like Gaethje, he is a volume striker and he lands around 5.80 strikes per minute. Ferguson also absorbs a lot of damage, but still much less compared to Gaethje.

Who has better striking – Gaethje can land with more power. But, Ferguson is on another level when it comes to technique. Plus, he has the unique ability to make adjustments in the middle of the fight. Thus, we believe Ferguson is a more complete striker and a better fighter on the feet.

UFC 249: Who has better wrestling?

It’s very unlikely this fight will go to the ground at all. They both have a strong background in amateur wrestling and abilities to advance to the mat. But let’s be realistic, standup fighting is what these two love the most.

As a former NCAA Division I wrestler, Gaethje has better wrestling skills on paper. Yet, he mostly utilizes strong defensive wrestling skills to keep the fight standing. Despite being such a decorated wrestler, we never saw him shooting for a takedown inside the UFC octagon.

Like Gaethje, Ferguson also has a high takedown defense of 75%. Yet, we have to take this number with a reserve. In his last two fights against Anthony Pettis and Kevin Lee, Ferguson showed many holes in his defense. Both of these fighters were able to take him down easily.

The truth is, Ferguson doesn’t mind being on the bottom at all. He has a slick submission game off his back and is capable of doing much damage with elbows. Plus, his scrambles are insane, and he can easily get back to his feet.

Who has the advantage – We believe Justin Gaethje has better wrestling skills.

UFC 249: Who has better submissions?

Alright, we are slowly moving into Tony’s world now. Although they are evenly matched in other aspects of MMA, Tony has a clear advantage when it comes to BJJ. Many people think he has the best BJJ game inside the lightweight division.

Gaethje has shown no ground game in his UFC bouts thus far. The man is a striker to the bone, and he simply loves wild pocket exchanges.

Ferguson is a BJJ black belt under Eddie Bravo and a very dangerous submission specialist. Once on the mat, Ferguson shines with fast transitions and great finishing instincts.

What’s more, he has a very dangerous submission game off his back. As seen against Kevin Lee, he is very flexible and can secure a submission in a split of a second. His favorite submissions are D’Arce and rear-naked chokes.

Gaethje needs to put his vicious kicks to work right from the first second. A couple of nasty leg kicks could limit Ferguson’s movement and make him more stationary. This way, Gaethje could initiate the close-range brawls and do some serious damage.

Remember, Gaethje doesn’t have anything to lose in this fight. So we expect him to be very aggressive early in the fight. As we know, Ferguson is a bit slow in the opening minutes and this is where Gaethje could knock him out.

Since he is stepping in on short notice, we are not sure if he has a gas tank to follow Ferguson’s relentless pace. Justin Gaethje simply needs to make something happen early in the fight.

With the proper fight camp behind him, Ferguson is in top shape and his mind is ready for war. Also, he will have much better conditioning.

We may expect him to start slowly and use his high reach to land some nice punches and find his rhythm. After surviving the early storm, Ferguson will apply forward pressure and start destroying Gaethje with more volume. For sure, he will attempt to tire Gaethje out with hard kicks and punches.

In other words, Ferguson will try to drive Gaethje into the deep waters and break him with vicious Muay Thai techniques and relentless pace.

Expect nothing but fireworks in the first two rounds. As a faster starter, Gathje will be the early aggressor and he may end up winning the opening round. But, Tony will speed up in the second and start destroying Gaethje on the feet.

For sure, Gaethje will have his moments in this fight. He has one of the strongest chins in a division and is capable of receiving two hard shots to land one. Thus, don’t sleep on his power and ability to hurt Ferguson.

Overall, we firmly believe Ferguson’s striking and cardio are much better. He’s faced heavy-handed rivals before and was able to absorb their best shots.

So, we are predicting that Gaethje will gas out late in the second round and that Ferguson will stop him in third via TKO.