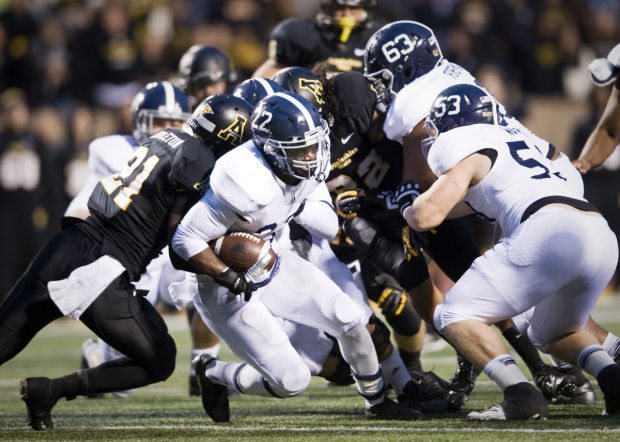 Georgia Southern is a perfect 4-0 ATS in its inaugural FBS campaign, and I expect the Eagles to remain perfect against the Vegas number after Thursday’s game against Appalachian State.  These two former Southern Conference foes combined for an incredible nine FCS/IAA National Championships in 23 years (1985-2007), and the Mountaineers have won three straight in this series that dates back to 1923. Revenge will be squarely on the minds of Georgia Southern as the Mountaineers walked away with a 31-28 win in their last trip to Statesboro, effectively ended the Eagles’ thirteen game home win streak.

Despite nearly upending both North Carolina State (24-23) and Georgia Tech as large road underdogs, the betting market continues to undervalue the Eagles. Georgia Southern is 0.2 yards per rush play, 0.1 yards per pass play and 0.1 yards per play better than average defensively this season, which is good enough to limit a subpar Appalachian State attack that is 0.6 yards per play worse than average (5.5 yards per play against teams that would combine to allow 6.1 yards per play to a mediocre offensive squad).  Based on the blatant mismatch from the line of scrimmage, I expect the Eagles to eclipse fifty points tonight.

The situation also strongly favors the Eagles as they are returning home off a confidence-boosting 28-6 road win over South Alabama in their Sun Belt Conference opener.  In contrast, Appalachian State hits the road for the second straight week after suffering a disheartening 21-20 loss at Southern Mississippi where the Mountaineers had an extra-point blocked with six seconds left in regulation.  The Mountaineers also missed three field goals, which leaves little to be desired with head coach Scott Satterfield’s special teams unit.  My math model favors Georgia Southern by three touchdowns and the Eagles fall into a very good 21-0-1 ATS subset of an 87-31-5 ATS momentum situation of mine.  Lay the points with the avenging Eagles and invest with confidence.