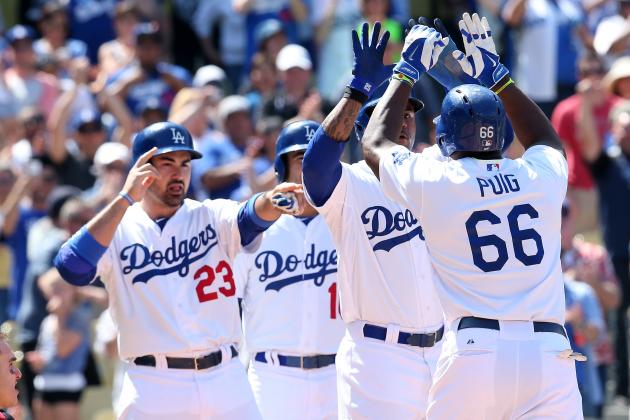 The Dodgers acquired right-hander Mike Bolsinger, who had been designated for assignment by the Diamondbacks, in exchange for cash considerations during the offseason.  The 27-year-old was 1-6 with a 5.50 ERA in ten games (nine starts) for the Diamondbacks last year, but those surface statistics do not tell the whole story.

Bolsinger features a cutter with a decent amount of downward break, together with a loopy curve (79-84 mph) that induces a large number of ground balls.  In fact, Bolsinger has been quite effective in keeping the ball on the ground in his professional career as evidenced by his 52.4% GB% last year and 56.3% GB% this season.

While the righty doesn’t possess overpowering stuff, he keeps his 88-90 mph fastball down in the zone.  Getting back to last year’s 5.50 ERA, Bolsinger’s fielding-independent numbers were excellent (90 xFIP-, 105 FIP-).  Prior to the trade, Bolsinger’s projection as a starter called for him to produce a 1.7 WAR every 200 innings, which exceeds replacement level talent.

Bolsinger made his season debut on April 23 wherein he allowed one run on five hits in 5 2/3-innings of work against San Francisco at AT&T Park.  Since that outing, Bolsinger has been pitching in Triple-A Oklahoma City where he is 2-0 with a 1.42 ERA and 0.95 WHIP.  Even more impressive is the fact that Bolsinger has compiled 28 strikeouts in just nineteen innings of work.

Meanwhile, the Marlins are a money-burning 10-17 (-8.4 units) versus right-handed starters against whom they are batting just .263 with a .312 on base percentage (3.9 runs per game).  Let’s also note that Miami is averaging a mere 3.6 runs over its last seven games.

The ageless Dan Haren toes the rubber for Miami tonight, and the 34-year-old veteran is 4-1 with a 2.68 ERA and 0.91 WHIP in 2015.  However, Haren’s underlying metrics tell an entirely different story:

The biggest concern for Miami has to be struggling closer Steve Cishek, who blew his fourth save in seven opportunities last night.  “It’s just very disappointing.  All I needed to do was get the last three outs of the game, but I continued to let the team down,” said Cishek.  “I mean, this is about as low as I can get.  This is a huge trial in my life right now career-wise, but I’ve always found a way to get out of it.  I’m waiting for that time to come.”

In contrast, the Marlins are just 5-18 in their last 23 games versus teams with a winning record, 21-45 on the road versus .601 or greater opposition and 1-4 in their last five games versus right-handed starters.  Take the Dodgers in this Major League Baseball clash and invest with confidence.