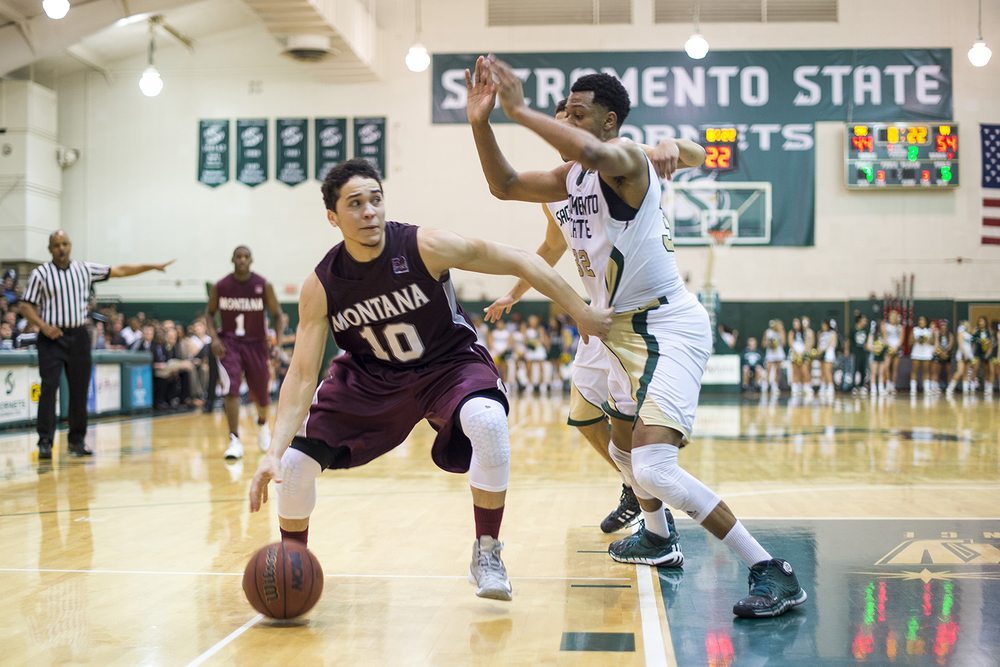 Sacramento State should be the class of the Big Sky Conference as college basketball head coach Brian Katz welcomes back five starters, including veteran Mikh McKinney, who was the school’s first-ever player to earn a unanimous spot on the All-Big Sky first team. The fact that Sacramento State is heading in the right direction under Katz is evidenced by the fact that the Hornets clinched the program’s first Big Sky tournament berth in eight years.

Sacramento State boasts the best backcourt in the conference behind McKinney (16.6 ppg; 4.6 asp; 3.8 rpg) and senior Dylan Garrity (13.2 ppg; 3.6 rpg). The duo has not disappointed early on in the 2014-2015 campaign as McKinney leads the team with 15.8 points per game on 53.8% shooting from the field, while Garrity is second on the Hornets with 12.7 points per game on 42.5% shooting from beyond the arc. McKinney is the clear leader of the offense as he led the team in scoring, assists and steals last season, while ranking in the conference’s top ten in all three statistical categories.

“I think he can continue to get better . . .That’s about all he does, go to school and work on his game,” coach Katz said of McKinney. Meanwhile, Garrity provides veteran leadership as the 6-2 senior has been a starter for the duration of his collegiate career, and earned honorable mention all-conference notice in each of his previous three seasons. With McKinney and Garrity anchoring Sacramento’s backcourt, there is little doubt that the Hornets will post their first winning record as a Division I college basketball team. And, I would not be surprised to see the Hornets’ celebrating during the NCAA Tournament’s Selection Sunday show in March.

Sacramento State’s backcourt depth is provided by junior Cody Demps, who averaged 8.0 points per game last year and is a strong ball handler who is capable of running the point. The Hornets’ frontcourt is led by seniors Zack Mills, Alex Tiffin and sophomores Nick Hornsby and Eric Stuteville. Mills started the team’s last 24 games last season, while Tiffin shot at least 50% from the field fourteen time. The most pleasant surprise has been the development of Stuteville, who finished last season averaging 9.5 points and 4.1 rebounds in the Hornets’ final eight games.

Meanwhile, Cal State Fullerton enters the 2014-2015 season with an undersized and under-talented roster that suffered last season under first-year head coach Dedrique Taylor with an 11-20 record (6-10 conference). Like in years past, Taylor is relying heavily upon transfers, but two of his recruits – Jordan Mason and Malcolm Henderson – have yet to play this season. The coaches had hoped that Mason would fill the gap of departed Big-West guard Michael Williams, who averaged 17.4 points per game last year.

Cal State Fullerton senior transfer Moses Morgan has tried to fill the gap left by Williams, but he is shooting a woeful 37.1% from the field and 22.0% from three-point territory in 2014 (33:13 mpg). Coach Taylor was also relying upon Henderson to improve the team’s rebounding capabilities, but he is not even on the roster. Junior college transfer Kennedy Esume was the second part of coach Taylor’s plans for the Titan’s inside presence, but he is only averaging 1.8 points in 10.47 minutes per game. “We’re counting on them to improve our athleticism and rebounding,” Taylor said of Henderson and Esume.

I also like the continuity and chemistry developed by Sacramento State coach Katz, who has used the same starting lineup in six straight games, consisting of Dylan Garrity and Mikh McKinney at guard, Cody Demps at swingman, Nick Hornsby at forward and Eric Stuteville at center. That starting lineup has gone 4-2 thus far. In addition, that fivesome has been together for just over 80 minutes of floor time this year, and has combined to outscore the opposition by 36 points during that time. Home court advantage should not be overlooked as the Hornets are 24-7 at The Nest dating back to the 2012-2013 season.

From a technical standpoint, Cal State Fullerton is a money-burning 6-14 ATS on the road, 3-10 ATS on the road versus college basketball teams with a winning record and 0-3-1 ATS in its last four games versus teams with a winning record, whereas the Hornets are 8-1 ATS in their last nine home games, 7-2-1 ATS in their last nine games following a loss and 2-0-2 ATS in their last four games versus Big West Conference foes. Lay the points with Sacramento State in tonight’s college basketball affair and invest with confidence.