The LSU Tigers are a Legitimate National Title Contender in 2015 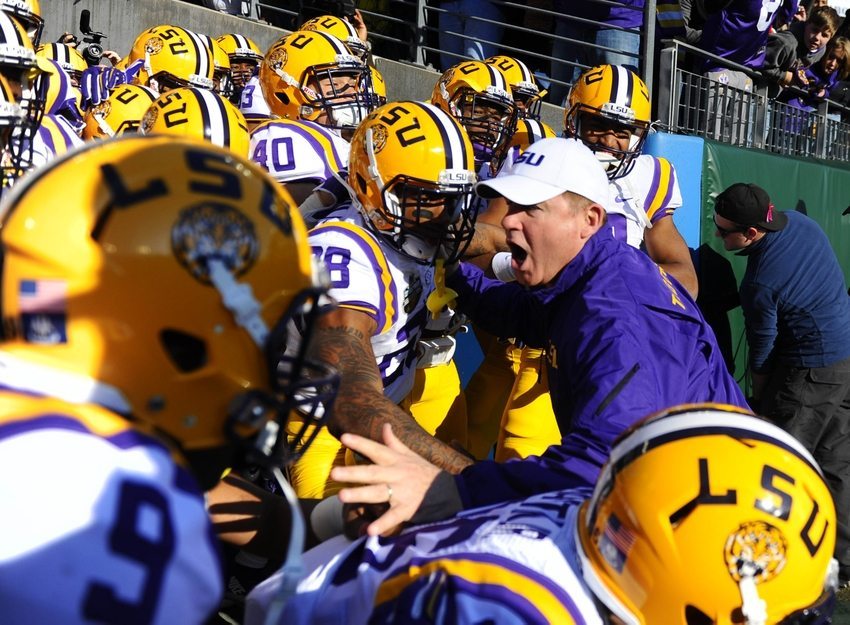 LSU finished last season with a disappointing 31-28 loss to Notre Dame in the Music City Bowl, but the Tigers return fifteen starters (most since 2005) and will have a vastly improved offense behind quarterback Brandon Harris.  Improvement from the quarterback position won’t take much as three LSU gunslingers combined for just 2,118 yards last season (50%; 17-9).

Harris will be aided by one of the conference’s best backfields led by sophomore Leonard Fournette, who garnered 1,034 yards at 5.5 yards per cary last year.  The loss of Kenny Hilliard to the NFL hurts the ground game, but many (including myself) are calling for Fournette to live up to expectations and have a breakout campaign in 2015.

I am also extremely impressed with the wide receiving corp. returning for offensive coordinator Cam Cameron.  Indeed, the Tigers boast one of the most dynamic duos in Travin Dural and Malachi Dupre.  Dural led the team in receiving yards last year with 758 (20.5), while Dupre finished second in yards with 318 (22.7).  With improved quarterback play and a very good backfield, I expect this unit to excel in 2015.

The Tigers also welcome back 73 career starts on the offensive line, including 2nd Team SEC Vadal Alexander.  After underperforming last season, I expect improved play from this unit in 2015.  LSU’s defense will once again be elite behind one of the nation’s best secondaries led by star Tre’Davious White.  The Tigers limited opposing quarterbacks to a 51.7% complete rate and a 10-10 ratio last year, and I expect similar results in 2015.

LSU’s front seven limited opponents to a mere 17.5 points per game last season, and the return of linebacker Kendall Beckwith and six of its top 8 defensive linemen will make the unit even stronger this year.  The Tigers will also possess one of the nation’s best special team’s units as head coach Les Miles has always fielded excellent special teams throughout his coaching career.

With the entire unit returning this season, including placekicker Colby Delahoussaye (13-for-14 last year) and punter Jamie Keen (44.9; 41.4 net last year), I expect the Tigers’ special team’s unit to finish in the Top 5 nationally.  Let’s also note that Leonard Fournette, who averaged 26.0 yards per kick return last season, should be even better in his second year.

People like to give coach Miles a hard time, but he led LSU to consecutive double-digit wins after taking over for Nick Saban in 2005.  Miles also led the Tigers to the National Title in just his third season in Baton Rouge!  The key game this season will be against Alabama on November 7.  And, while traveling to Alabama is always a daunting task, the Tigers have defeated the Crimson Tide in five of their last seven trips to Tuscaloosa.