The Impact of Injuries on the Chicago Bulls 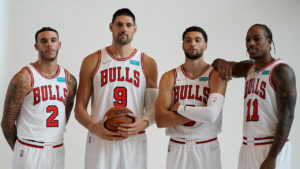 Heading into the fourth weekend of January, the Chicago Bulls still maintain a slim lead in the Eastern Conference standings. Miami, Brooklyn, and Milwaukee are all within two games of Chicago and are hot on the Bulls’ tail.

The Bulls will face some adversity over the latter half of the regular season. Zach LaVine, who averages 24.9 points per game, and Lonzo Ball, who averages 13 points, 5.4 rebounds, and 5.1 assists game, are both out with injuries. LaVine will return sooner than Ball but when that is no one knows. Ball elected to have surgery to repair a meniscus tear in his left knee. He will miss six to eight weeks.

Lost in the shuffle is the injury to forward Derrick Jones Jr. The 6-foot-6-inch Jones averages 6.3 points and 3.4 rebounds, but plays a key role on the Bulls bench. He has a bone bruise in his right knee and will miss two to four weeks as a result.

These injuries will surely have an impact on the Bulls and the remainder of the regular season.

The injury to Jones might have the biggest impact. The Bulls were looking to be active in acquiring one more piece of the puzzle prior to the NBA trade deadline. Chicago had an eye on Detroit’s Jerami Grant. Sacramento’s Harrison Barnes was another name mentioned, but an injured Jones as part of a deal is not as attractive as a healthy Jones.

The Bulls have a $5 million trade exception and they are $4.6 million below the luxury tax. They could bring in another player that could help them over the remainder of the season and into the playoffs. It still might happen, but the caliber of player might not be what they could have acquired.

While there is no doubt the injuries to LaVine, Ball, and Jones will impact the Bulls season, maybe that impact is not what everyone thinks. If there was a time during the season when Chicago would want (not that they ever would) to be without two starters and a key reserve, it might be the next month and a half.

That schedule may help the Bulls navigate the losses of three key players while one of them – LaVine – works his way back into the lineup. There are reports that LaVine could return to the lineup before the end of January.

With LaVine and leading scorer DeMar DeRozan stealing much of the spotlight in Chicago, fans might have forgotten about two key pieces of the roster – Nikola Vucevic and Coby White. Vucevic was acquired at midseason last year and averaged 21.5 points and 11.5 rebounds a game for the Bulls in 26 games last season. Vucevic’s current scoring average of 16.3 points a game is his lowest since his third year in the league. Don’t forget, before Vucevic was traded to Chicago he was averaging a career-high 24.5 points a game for Orlando.

The same is true of White, who can also score. Last season, his second in the NBA, White averaged 15.1 points per game. He started 54 games, but this season with Ball moving into the starting lineup White has come off the bench to average 12.7. With his role increased, look for White to more than makeup for the absence of Ball.

With Vucevic and White as well as the Bulls schedule through the end of February, it makes Chicago interesting futures bet. The Bulls are listed at +2200 to win the NBA title, +1100 to win the Eastern Conference, and +140 to win the Central Division.