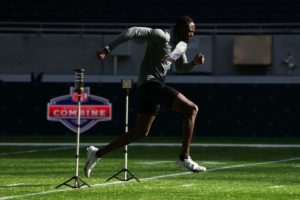 The annual NFL scouting combine gets underway this week and over 300 potential draft picks will go through medical, physical, and mental evaluations as their professional football careers hang in the balance. One physical test that may make more of a difference than anything else a prospect does at the combine is the 40-yard dash. A blazing fast 40 can improve a player’s draft stock immensely. Here’s a look at the fastest players ever at the NFL combine.

Ford was a talented wide receiver at Clemson where he also holds an ACC indoor track record. Ford ran the 60 meters in 6.52 as a freshman in 2007. After his career with the Tigers, Ford ran at the 2010 NFL combine and blazed to a 4.28. The Raiders took a shot on Ford who likely would have gone undrafted had it not been for that 40-yard dash.

Bailey was an extremely talented player at Georgia who also happened to be a member of the school’s track team. He set a school indoor long jump record back in 1998, finished third at the SEC Indoor Championships the same year and ran the 55 and 60 meters at Georgia. In 1999, he ran a 4.28 in the 40 at the NFL combine which would lead to a 12-time Pro Bowl career and a spot in the Pro Football Hall of Fame.

Stanford Routt climbed the draft board after his 4.27 at the 2005 NFL combine. Routt was a track athlete at Houston which prompted the Raiders to draft him in the second round with the No. 38 pick. Routt stayed with the Raiders through 2011 and finished his career that year with Kansas City and Houston.

In the 2020 draft, there were two or three wide receivers projected to go way ahead of Ruggs. Then, he ran his 40 at the NFL combine. He ended up being the first receiver off the board at No. 12 overall. He went before his teammate Jerry Jeudy who many predicted would be the first receiver to be selected. Unfortunately, Ruggs was let go by the Raiders last season after he was charged with driving under the influence resulting in death.

Goodwin was not the star receiver at Texas. He was, however, the track star. He won two NCAA championships in the long jump and competed at the 2012 Summer Olympics. After running a 4.27 40-yard dash, the Buffalo Bills took a shot on Goodwin in the third round of the 2013 NFL draft. Goodwin has been in the league ever since most recently with Chicago.

One solid 4.26 40-yard dash led to Jerome Mathis going from Hampton to the NFL. He was a fourth-round draft pick of the Houston Texans in 2005. He would make the Pro Bowl as a kick returner as a rookie.

Archer was extremely fast, but he wasn’t very big (5-8, 173). He was an All-MAC player at Kent State with 1,429 rushing yards, 561 receiving yards and 20 total touchdowns. The Steelers drafted Archer in the third round of the 2014 draft. He played some special teams but just couldn’t make the transition to the NFL.

It was the first year of electronic timing at the NFL combine – 1999. Rondel Menendez was a wide receiver from FCS Eastern Kentucky who had blazing speed. His 4.24 would stand as the fastest 40 until it was matched in 2008. While Menendez was fast, his NFL career was short-lived. Atlanta took him in the seventh round and Menendez lasted just two seasons.

The combine’s 40 record now belongs to the former Washington wide receiver who is now with the New York Giants. Ross was a track star as well which helped him run that 4.22. That one 40-yard dash propelled Ross to the No. 9 overall pick in the 2017 draft. He spent his first four NFL seasons with Cincinnati where he was often injured and caught just 51 passes. He had 11 receptions with the Giants last season.