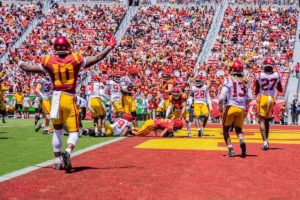 A year ago, no one expected Cincinnati to play for a national championship. The Bearcats went unbeaten (13-0) to become the first Group of 5 school to make the College Football Playoff.

Who will it be this year? The Big 4 of Alabama, Georgia, Ohio State, and Clemson are the top four favorites on the board to win this year’s CFP. Alabama leads at +180 and the top four are the only schools given better than +1000 odds. Is there a surprise team that could emerge?

It’s one of the more intriguing stories heading into the 2022 college football season. Former Oklahoma head coach Lincoln Riley went 55-10 with the Sooners in five seasons and then decided to make the jump to USC. The Trojans became an instant contender for the Pac-12 and a potential CFP bid when the transfer portal opened up.

Riley brings QB Caleb Williams with him from Oklahoma and he’s a good one. Jerry Rice’s son Brenden is one of Williams’ receivers and the schedule avoids Oregon in the regular season. The Trojans’ toughest game will be the season finale with Notre Dame, which is at home.

The offense should be very good and the defense, which returns just four starters will have to catch up. The Trojans could roll through the Pac-12 schedule and surprise the nation.

Speaking of Notre Dame, the Irish just missed out on last year’s playoff. They have a new head coach in Marcus Freeman and face a difficult schedule beginning with Ohio State on the road to start the season.

Still, the Fighting Irish return eight offensive starters. The entire offensive line is back and that will make things easier for new QB Tyler Buchner, who was named the starter for Week 1.

The defense should continue to be one of the better units in the country. Even with an early loss, Notre Dame should be right in the thick of the CFP race when they travel to USC to end the regular season.

Is this the year Jimbo Fisher finally turns a corner in College Station? He had the nation’s No. 1 recruiting class in 2022 and he will also have one of the nation’s best defenses again. The Aggies finished No. 5 in scoring defense (15.9 ppg) last season.

The big question for the Aggies is at quarterback. Max Johnson, who transferred from LSU, might be the leading candidate to take over, but true freshman Conner Weigman is pushing him. Don’t forget Haynes King either. He could just as easily win the job.

Yes, it can be done again. No one expected it last year and you can bet no one is expecting it in 2022. The Bearcats lost CBs Ahmad Gardner, Coby Bryant, and QB Desmond Ridder to the NFL, but they return enough to win the AAC title again.

QB Ben Bryant returns to Cincinnati after playing at Eastern Michigan last season. All five offensive linemen are back and four starters return to a defense that was fifth in the nation in points allowed. If the Bearcats run the table in the conference again, a repeat performance may be possible.