Should Bettors Jump on the Utah State Bandwagon? 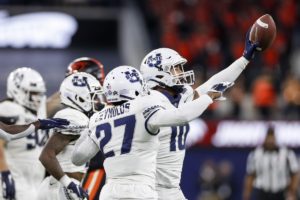 The bandwagon isn’t all that large, but it’s large enough to draw some attention. Yes, Utah State is actually drawing some interest in the College Football Playoff race. By the end of July, the Aggies had more national championship bets of $1,000 or more than any other college football teams, except Alabama and Ohio State.

The Crimson Tide and Buckeyes, of course, are the leading favorites to capture this year’s CFP title. Utah State? Not even in the discussion. Still, the Aggies are attracting bettors left and right. How in the world does that happen?

It all started with a pretty well-known bettor in New Jersey who decided – on a whim – to put down $1,000 on Utah State to win the national championship. The Aggies are a Mountain West team that could surprise college football and win the conference. They return 12 starters from last year’s team that went 11-3 and beat Oregon State. Utah State also brought in a number of high-quality transfers including a receiver from Alabama.

Sure, the Aggies have the makings of a very good college football team. The national championship though? That may be a stretch; however, the prominent New Jersey bettor decided that one $1,000 wager wasn’t enough. The Aggies’ odds of 1,000-1 didn’t move after the first bet. So, our high-profile bettor laid down another grand on Utah State to win it all. When that bet didn’t move the number, he put down a third bet.

News of the $1,000 bets on Utah State spread and, of course, other bettors jumped on the bandwagon of one. As noted, the Aggies now have the third-most $1,000 or more bets in the CFP national championship market. The $1,000 bet at 1,000-1 odds would pay out a cool $1 million. That begs the question, could it happen?

A 1,000-1 bet paying out is extremely rare. It would probably be the equivalent of a 38-point underdog winning an FBS game. A few years ago, FCS Howard pulled off a dramatic upset of UNLV as a 45-point underdog. In a game featuring two FBS opponents, there has only been one upset involving an underdog of at least 38 points. In 2007, Stanford beat USC as a 40.5-point underdog.