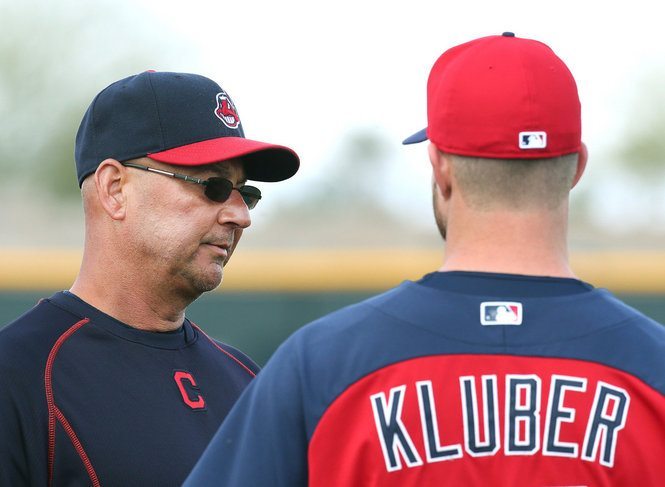 Kluber has the highest Wins Above Replacement (WAR) total of any starting pitcher without a win this season, according to FanGraphs. He’s improved his strikeout rate, swinging strike rate, and groundball rate, but has received just two runs of support per game.

Even more concerning is the fact that the rookie right-hander owns a 16/14 K/BB ratio over 19 2/3-innings of work. His 16.1 walk percentage is the highest among all Major League starters with at least 15 innings pitched this season.  Even worse news for Toronto fans is the fact that Sanchez’s underlying metrics don’t leave much room for hope.

While Cleveland has been struggling at the plate this season, the month of May brings a sense of relief to the locker room. “I can’t tell you how much a different calendar month does for a baseball player’s psyche,” Indians second baseman Jason Kipnis said. “When you say it turns a page, it really does.”

That sense of relief was evidenced last night wherein the Indians scored nine runs on 13 hits, including a trio of home runs by Jason Kipnis, Michael Brantley and Brett Hayes. “We’ve put up good at-bats. We’ve hit the ball hard. Stuff just hasn’t been falling,” Indians third baseman Lonnie Chisenhall said. “It was certainly a fun night all-around. It’s May now. April is over.” Indeed, each member of Cleveland’s starting lineup collected at least one hit. “Today it was contagious and guys were feeling good and there was a loose environment in the dugout,” Kipnis said.

With Kluber toeing the rubber, the Indians are 21-7 in his last 28 starts, including 8-0 versus American League East opposition, 11-1 at home versus .499 or worse opponents, 7-3 in game three of a series.  Take Cleveland in this Major League Baseball clash and invest with confidence.