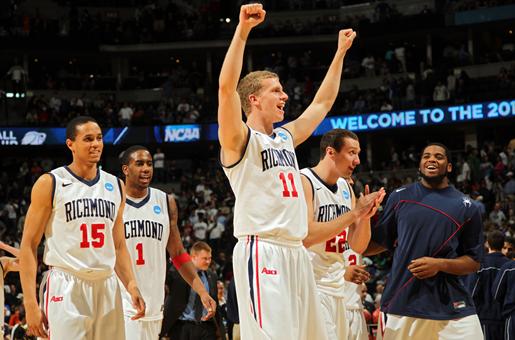 Richmond is playing its best basketball of the season as the Spiders have won seven of their last nine games, including upsets over St. Bonaventure (64-62) and Duquesne (75-58). Moreover, the Spiders have won and covered their last three games despite losing leading scorer Cedrick Lindsey to a season-ending knee injury on February 1. With the loss of Lindsey, Kendall Anthony has taken on an increased leadership role in the backcourt as he has scored twenty or more points in each of the last four games and was named Atlantic 10 Player of the Week for the second time in four weeks. Anthony is averaging 25.8 points over the last four games and leads the Atlantic 10 in scoring in conference play with 20.0 points per game.

Richmond possesses one of the best home courts in the nation as the Spiders are 11-2 at home this season and hve won 65 of its last 77 games in the Robins Center. Fundamentally, Richmond’s success is predicated upon an excellent defense that is allowing 65.7 points per game to teams that would combine to average 71.7 points per game. More importantly, the Spiders are limiting opponents to a mere 62.3 points per game at home this season on 39.1% shooting from the field and 24.7% from beyond the arc. Richmond has held opponents to 64 points or less in six of its last nine games and sixteen of 25 games overall this season. The Spiders are second in the Atlantic 10 in scoring defense and ninth in the nation in three-point field-goal percentage defense (.285).

Richmond’s defensive success is significant in that the Spiders are 9-1 when holding opponents to less than 70 points, including a perfect 3-0 in conference play. I also like the fact that Richmond is ranked 21st in the nation in turnover margin (+3.10) and 32nd in the nation in fewest turnovers per game (10.5). Those numbers are relevant in that the Spiders are 16-5 this when having equal of fewer turnovers than their opponents, including 6-1 in conference action. Foul shooting will also play an integral part in tonight’s game as Richmond is making 71.8% of its free throws in conference play and 72.5% over the last five games. In contrast, George Washington is shooting just 65.8% from the charity stripe, including 64.0% on the road, 63.5% versus conference opponents and 60.4% over the last five games.

From a technical standpoint, George Washington is a money-burning 3-11 ATS versus teams with a winning record, 4-13 ATS after playing a game as a home favorite and 0-7 ATS after failing to cover the point spread in two or more consecutive games. Richmond head coach Chris Mooney is 37-24 ATS in competitively-priced games (+3 to -3) and 35-22 ATS versus teams who are outscoring their opponents by four or more points per game. Meanwhile, George Washington head coach Mike Lonergan is just 17-28 ATS as an underdog, 10-19 ATS as a road underdog and 3-11 ATS on the road versus teams with a winning record. Finally, Richmond is sitting squarely on the NCAA Tournament bubble and needs to win two of its remaining three games against George Washington, VCU and Dayton. Look for the Spiders to begin their march to the Tournament with as marquee win over George Washington inside the friendly confines of the Robins Center.