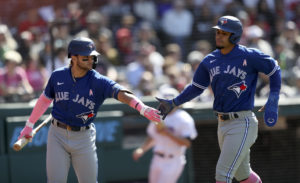 The professional handicappers at Oskeim Sports have the winning information you need before betting on Monday’s MLB games. Oskeim’s MLB Betting Market Report gives you the winning edge you need.

Analysis: Since March 27, 2021, teams in game one of a series coming off a three-game sweep (and the last game went over the total) are a money-burning 8-25 straight-up (1-5 L/6). Road favorites with starting pitchers who lost their previous personal matchup against the home team are a profitable 47-14 straight-up if their team won the previous matchup versus the opponent, including 28-9 straight-up in divisional play.

Analysis: Since March 27, 2019, divisional favorites of -131 or greater versus opponents coming off a game with ten or more hits and no home runs are 103-36 straight-up in games with a total of six or more runs. This situation is a profitable 30-7 straight-up if the team lost their previous game by more than two runs. Since July 7, 2019, the Blue Jays are 12-6 (+7.9% ROI) straight-up and +13.3% ROI against the run line as favorites following a loss by five or more runs.

Analysis: Seattle falls into a profitable 68-24 system that invests on certain American League home favorites of -125 to -175 that allow 4.4 or fewer runs per game versus starting pitchers who gave up no earned runs in their previous outing. This situation is 45-18 (+18.9 units) over the last three seasons.

Seattle right-hander George Kirby toes the rubber with a 3.12 ERA and 3.35 SIERA in nine starts this season (49.0 IP). In his last five starts, Kirby has posted a 2.17 ERA and 1.03 WHIP in 29 innings with 27 strikeouts. Take Seattle and invest with confidence.