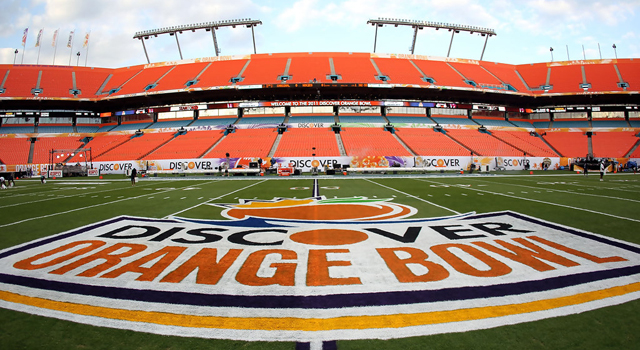 It’s been a tumultuous few weeks for the Buckeyes as they recently found out that defensive end Noah Spence will be suspended three games for violating an unspecified Big Ten rule. The loss of Spence is significant in that he finished second in the conference with eight sacks and had 14.5 tackles for losses among his 52 tackles in 2013. The news has only gotten worse for head coach Urban Meyer as star cornerback Bradley Roby, who suffered a bone bruise in his knee in the Big Ten championship game, has been downgraded to doubtful for tonight’s game against Clemson. The absence of Roby cannot be understated as he is leaving Ohio State for the NFL after tonight’s game, and scouts believe that he will make an immediate impact in the NFL next year.

Let’s also note that Ohio State lost senior safety Christian Bryant, a team leader, on September 28 after suffering a season-ending broken ankle. The Buckeyes enter tonight’s Orange Bowl with a secondary featuring only two original starters from the their season-opener (C.J. Barnett and Doran Grant). Making matters even worse for Ohio State is the fact that the Buckeyes have been plagued by a stomach virus over the last couple of weeks. “It’s been well-documented we’ve had stomach viruses going around,” said offensive coordinator Tom Herman after announcing that quarterback Braxton Miller missed a part of Wednesday’s practice with stomach issues. One also has to question Ohio State’s motivation after being one game away from playing for the National Championship. Like Baylor and Alabama before them, the Buckeyes will likely go through the motions to the benefit of Clemson investors.

For technical support, consider that New Year’s Day and later ACC bowl teams are 9-3-1 ATS off a SU and ATS loss, while all ACC bowl underdogs off a loss are 17-4-1 ATS, including 12-1 ATS as underdogs of more than three points. In contrast, New Year’s Day and later Big Ten bowl squads are a money-burning 2-16 SU and 3-15-1 ATS off a double-digit loss. Finally, Clemson has very good special teams led by place kicker Chandler Catanzaro, who is the nations most accurate kicker after making 31-of-33 field goal attempts over the last two seasons, including 9-of-10 from beyond forty yards. Motivation reins supreme in bowl games, and the Tigers are motivated to avenge their 70-33 loss in the 2008 Orange Bowl. Grab the points and invest with confidence.