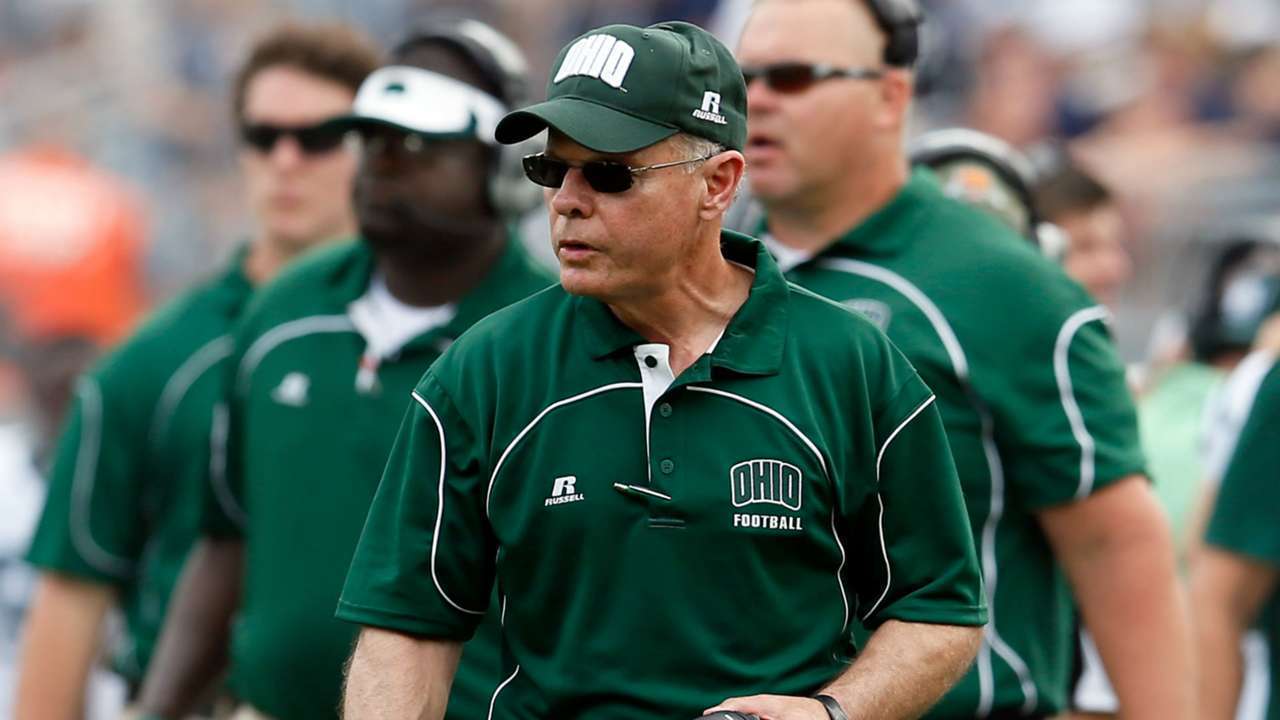 Ohio head coach Frank Solich took over an Ohio football program that had just two winning seasons over a period of 22 years and has managed to lead the Bobcats to postseason play in five of the last six years. Continuity within the coaching ranks has been important for the program as offensive coordinator Tim Albin and defensive coordinator Jimmy Burrow have both been with Solich for each of the last ten years. If history is a indicator, Ohio could have a breakout season in 2015 with eighteen returning starters, including the entire offensive line (99 career starts).

I alluded to Ohio’s experienced offensive line above, and the Bobcats also return two talented quarterbacks in Derrius Vick and JD Sprague, both of whom started last season. In Ohio’s season opener against Idaho, Vick was 13-for-16 for 192 yards and two touchdowns. Vick also rushed for 34 yards on nine carries.

Sprague also looked solid on the field (7-for-9), connecting on a touchdown pass in the second quarter. Three of Ohio’s top four receivers return from last year’s squad, including Brendan Cope who finished the Idaho game with four receptions for 129 yards and one touchdown.  Ohio’s improved offense is just one of many reasons for making this game a best bet.

Between speedster Daz’mond Patterson and walk-on AJ Ouellette, who led the team in rushing as a freshman, the Bobcats should post their best rushing numbers in at least five years. Ohio should also field a very goof defense that is anchored by an outstanding linebacking corp. that returns its top three tacklers, including 3rd Team MAC Quentin Poling (89 tackles, 5 sacks last season). Special team’s coordinator Brian Haines should also field a very good unit as I project a Top 25 finish for the Bobcats in this department.

With only eleven returning starters, Marshall will not be nearly as potent (or talented) as last year. Now, amateur sports bettors and/or lazy sports handicappers will point to the fact that Marshall just knocked off a Big Ten school in its season opener.

However, that win was grossly misleading in that Marshall intercepted four passes (yes, Purdue’s quarterback is that bad), and returned two of those to the house for touchdowns. Marshall was actually outgained 454 total yards to 397 total yards in the game and looked lackluster for most of the afternoon.

From a technical standpoint, coach Solich is 14-2 SU in home openers, with the two losses coming by a combined ten points. Ohio is a perfect 4-0 ATS under Solich as home underdogs off a win, and the Bobcats are looking to avenge an embarrassing 44-14 loss at Marshall last season wherein they yielded 705 total yards.

Let’s also note that the home team is 12-2 ATS in this series and the Thundering Herd have failed to cover the spread in each of their last six trips to Athens. Finally, Ohio falls into a terrific 14-1 ATS system of mine that invests on certain avenging home underdogs with 17 or more returning starters when matched up against a non-conference foe.  The strong technical analysis alone makes Ohio a solid best bet.

Grab the generous points with Ohio as our free best bet and invest with confidence.