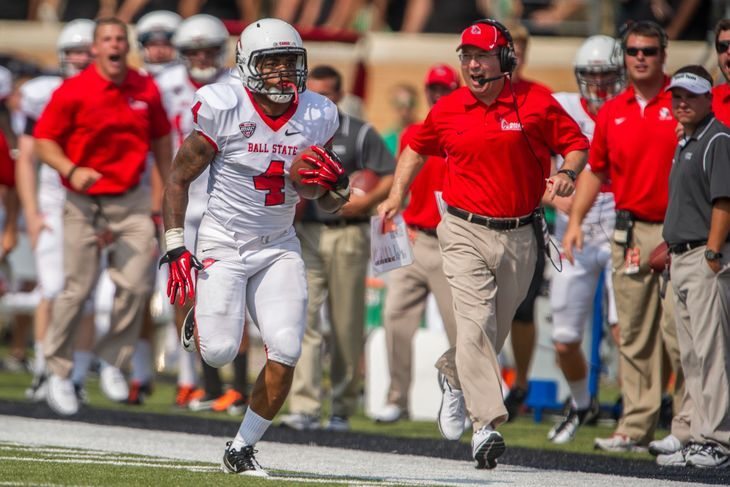 Head coach Pete Lembo has done a tremendous job since arriving in Muncie in 2011, leading Ball State to back-to-back 8-plus win seasons in 2012 and 2013. Now, Lembo returns eighteen starters, including veteran offensive and defensive lines that will help the Cardinals reach postseason play in 2015.

Ball State’s offense is led by quarterback Riley Neal, who has excellent pocket presence and is not susceptible to getting sacked or making mistakes (59.8% completion rate; zero sacks).  The Cardinals have had success running the ball behind a veteran offensive line that returns 1-2 career starts and all five starters from 2014.

I expect Ball State offensive coordinator Joey Lynch to emphasize more of an aerial attack to exploit a suspect Toledo secondary that recently lost cornerback Cameron Cole. The Rockets’ defensive backfield is allowing 303 pass yards per game at 6.9 yards per pass play so they are certainly susceptible through the air. Overall, I give Toledo a 0.5 yards per play advantage defensively over the Cardinals’ mediocre attack.

Meanwhile, Ball State has three starters back on its defensive line, including four of the unit’s top five tacklers. Defensive coordinator Kevin Kelly also welcomes back six of his top seven linebackers from last year, fielding the most experienced linebacking corp. in the MAC. While Ball State’s defense has been mediocre at best this season (6.3 yards per play to teams that would combine to average 6.3 yards per play), that is good enough to limit a pathetic Toledo attack that is 0.6 yards per play worse than average.

We can expect a heavy dose of star running back Kareem Hunt (if he plays; listed as questionable) because the Rockets have no chance of success throwing the ball against a very good Ball State secondary that is 0.5 yards per pass play better than average (7.6 yards per pass play to teams that would combine to average 8.1 yards per pass attempt). Hunt has been nursing a hamstring injury, and Toledo head coach Matt Campbell said on September 28 regarding Hunt’s availability to play against Ball State that “we’re going to have to make a really smart decision because I don’t want this to nag.”

Reports from Toledo indicate that Hunt practiced on Wednesday and is “closer to returning to action then he had been,” but the 225-pound back is currently listed as “questionable” for Saturday’s game against the Cardinals. Regardless, Ball State should have success slowing down the Rockets’ anemic attack even if Hunt plays (he won’t bee 100%).

Finally, don’t been fouled by Toledo’s perfect 3-0 record as the Rockets have been outgained by an average of 102 yards per game this season! Grab the generous points and invest with confidence.