Investment Advice: Please be advised that the Redskins are a money line investment.

Analysis: Position battles are a critical component to handicapping NFL preseason games, and player evaluations are in full effect for the Washington Redskins. The Washington Post reports that “spots in the rotation, whether at running back, wide receiver, kick returner, defensive back – and the difference between second and third string as opposed to not making the team at all – remain undetermined.” Head coach Mike Shanahan, who is 45-34-2 ATS in his preseason career, has indicated that quarterback Kirk Cousins will play for approximately the first half. And, that is excellent news for Washington investors as Cousins looks very comfortable with the offense in his second year. Indeed, Cousins completed six of seven passes for 52 yards and a touchdown in last week’s 22-21 win at Tennessee.

What makes Washington such a strong investment tonight is the fact that backup quarterbacks Rex Grossman and Pat White are battling for the third-string spot, and both will split the second half duties behind center. I also like the fact that tight end Fred Davis, who missed the majority of last season, played 13 snaps in the preseason opener wherein he made two catches, one of which was for a touchdown. “Fred will play more than he did in the first game,” Shanahan said. “He will probably play close to half. He’ll switch off there in a little bit. You are hoping that he keeps on improving. He feels very comfortable in himself in football shape. What I have seen thus far in camp is very encouraging because he has played well, he has caught the ball well, he has blocked well and hopefully he can continue to do that.” Davis is treating tonight like a regular season contest as he is hungry to prove his worth to the Washington organization. “I’ve been out nine months. I’m ready for any opportunity, preseason or anything. I’m going to play it like it’s a real game.”

Meanwhile, the Steelers are dealing with a host of injuries in the backfield as running backs Le’Veon Bell and Isaac Redman are game time decisions after missing a lot of practice last week. Pittsburgh’s special teams are also a mess after giving up a blocked punt and a fumbled punt in last week’s 18-13 loss to the Giants. Finally, reading between the lines indicates that head coach Mike Tomlin has not been impressed with the development of back quarterbacks Bruce Gradkowski and Landry Jones. The Steelers did not score a touchdown on offense against the Giants, and Tomlin suggested Gradkowski and Jones need to get better as they replace Byron Leftwich and Charlie Batch from a season ago. “I’m not displeased in any way with his (Gradkowski’s) progress thus far. But obviously we’ve got a ways to go,” Tomlin said. “ Jones has grown daily, but we’ve got a lot of ball in front of us.” Tomlin has also suggested that his offensive starters will only play one quarter, which means that both Gradkowski and Jones will see a lot of playing time tonight.

From a technical standpoint, coach Shanahan is 14-5 SU in preseason home openers, including a perfect 4-0 SU and ATS over the last four years. In contrast, the Steelers are a money-burning 1-8-1 ATS in preseason road openers and 2-5 ATS in week two of exhibition play. With Washington standing at 8-1 SU and ATS in this series and 11-4 SU and ATS in preseason games against the AFC, take the Redskins and invest with confidence.

Analysis: Less than 24 hours after the Colts were humiliated by the Buffalo Bills in in their preseason opener (44-20 final), Indianapolis owner Jim Irsay took to Twitter to condemn his team’s performance. “Many starters played briefly or were nursing little injuries, but it was a crap performance, my apologies/My commanders got n earful from me!” Irsay has every reason to be fuming after the Colts committed three turnovers and were outscored 41-10 over the final three quarters. Even more embarrassing was the fact that Buffalo set a new franchise record for points in a preseason game.

Playing time, or a lack thereof, certainly contributed to the Colts abysmal performance against the Bills last week. Andrew Luck played two series, while backup quarterback Matt Hasselbeck played only three series. Moreover, the starting offensive line, which Irsay upgraded during the offeseason as part of a $140 million spending spree on free agents, only played three series. Head coach Chuck Pagano also rested his starters on defense as second and third string players saw most of the action beginning in the second quarter. The disparate final score can also be explained by the fact that Buffalo opted to keep quarterback EJ Manuel and most of its offensive regulars on the field for the entire first half in last week’s preseason opener.

Motivation is a critical component to handicapping preseason football, and the Colts have a decided edge in that department for tonight’s contest. “I’ve been around owners who have called players out and demanded more out of you,” defensive lineman Cory Redding said. “Some guys need to be called out because they react better that way, in a good way. I think he lit a fire under some people.” Coach Pagano echoed Redding’s sentiments. “There’s no need to panic,” Pagano said. “But certainly, everybody’s accountable and everybody understands what they have to do. We’ll go back to work, get back to Anderson and get things fixed and come back and put this one behind us. We Obviously have got to play better and we will play better.”

Pagano also indicated shortly after the Buffalo debacle that his starters would see more action against the Giants. “They (starters) have to play more just to play as a unit and start to get a great feel for the guy next to them, what that guy’s job is. The more that they play, obviously you’re going to see the things that we’re looking for as far as stopping the run, putting pressure on the quarterback,” Pagano said. “So I think the more that these guys play, I think all that stuff will reveal itself.” Based on everything that I have read over the past week, it is abundantly clear that the Colts are the most motivated team in the NFL entering week two of exhibition play. From a technical standpoint, Indianapolis falls into 52-24 ATS, 46-21 ATS and 20-6 ATS systems of mine that are predicated upon the Colts’ blowout loss in week one of the preseason. With New York standing at 18-26 ATS as preseason favorites since 1983, take the Colts and invest with confidence. 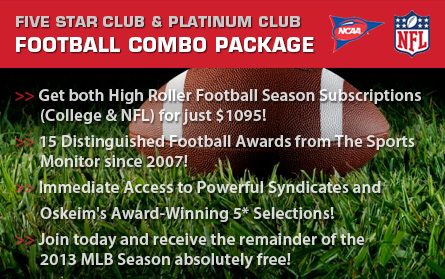