Oregon, UCLA Both Look to Bounce Back Off Pac-12 Losses 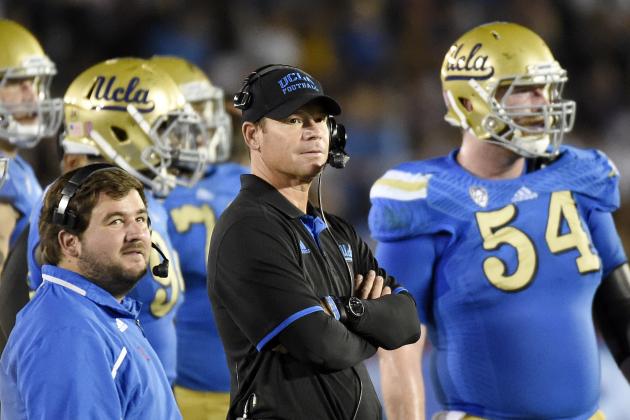 My math model actually favors UCLA by one point, and the Bruins apply to an excellent 37-3-1 ATS home bounce-back situation of mine that is predicated upon their upset loss at Utah last week.  Conversely, Oregon falls into a very negative 21-74-3 ATS road letdown situation that is based upon its 31-24 upset loss at home to Arizona last Saturday.  When both of these angles intersect one another, the situation is a perfect 6-0 ATS so I have no problem grabbing the points with the better team.

Oregon is 0.6 yards per rush play, 0.5 yards per pass play and 0.5 yards per play better than average defensively this season, but that is not nearly good enough to slow down the Bruins’ attack:

For those of you who are interested in how I arrived at the above-referenced figures, I simply incorporated Oregon’s offensive numbers to date: 0.7 yards per rush play, 2.6 yards per pass play and 1.3 yards per play better than average in 2014.  From a technical standpoint, UCLA is a profitable 27-13 ATS as a home underdog, 26-13 ATS following a home loss and 8-4 ATS in this series.

It also appears as if Oregon remains overrated by the betting market as the Ducks are 2-8 ATS in their last ten games overall, including 0-6 ATS in their last six Pac-12 games.  With UCLA standing at 14-5 ATS in its last nineteen home games versus teams with a winning record, grab the points with the Bruins and invest with confidence.