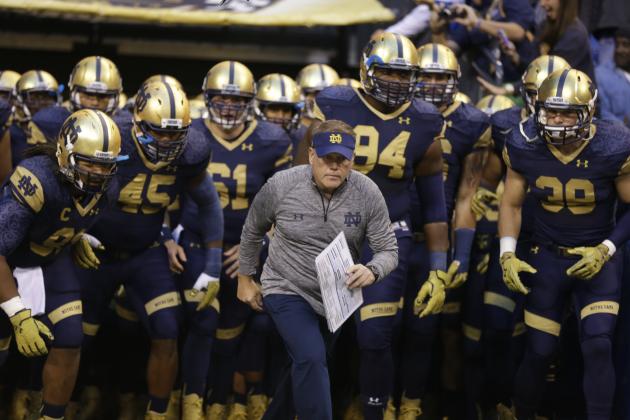 With seventeen returning starters, including several players who missed all of last year, Notre Dame is a legitimate National Contender in 2015.  Not only is Notre Dame one of the most experienced teams in college football, but the Fighting Irish field an elite defense that will be guided by linebacker Joe Schmidt.

Notre Dame’s linebacking unit returns three of its top four tacklers from last year and I expect significant improvement from this injury-riddled unit that allowed 29.2 points per game in 2014. The Irish also field an elite defensive line that returns every starter (and backup) from last year’s under-achieving unit.

I’m also impressed with Notre Dame’s secondary that returns five players who have started at least ten games in their collegiate careers.  The Irish also welcome California transfer Avery Sebastian, who started six games in Berkeley over the last three years.  Based on its depth and experience, the Irish will have one of the nation’s best stop units in 2015.

From an offensive standpoint, Notre Dame boasts an elite wide receiving corp. anchored by Will Fuller, who has 4.4 speed and led the team with 1,094 yards (14.4 ypc) last year.  Chris Brown finished second on the team with 548 yards (14.1 ypc) and also returns to what will be an outstanding receiving unit.

Notre Dame’s backfield took a hit when #2 running back Greg Bryant was recently ruled academically ineligible this season.  However, the Irish return their leading rusher in Tarean Folston, who garnered 889 yards at 5.1 yards per carry last season.  CJ Prosise reportedly looked good this spring after being moved from wide receiver to the backfield and provides depth.

Malik Zaire, who was last year’s backup quarterback and looked solid in Notre Dame’s 31-28 win over LSU in the Music City Bowl, will start for the Irish in 2015.  Zaire is also adept at running the read option and should improve upon Notre Dame’s offensive numbers from last season.  Zaire also gets to work behind a strong offensive line that returns 68 career starts, which will further enhance his growth.

Notre Dame has excellent depth and experience in 2015, and I would not be surprised to see the Irish in the Playoffs come 2016.  Brian Kelly’s squad are legitimate National Title Contenders.