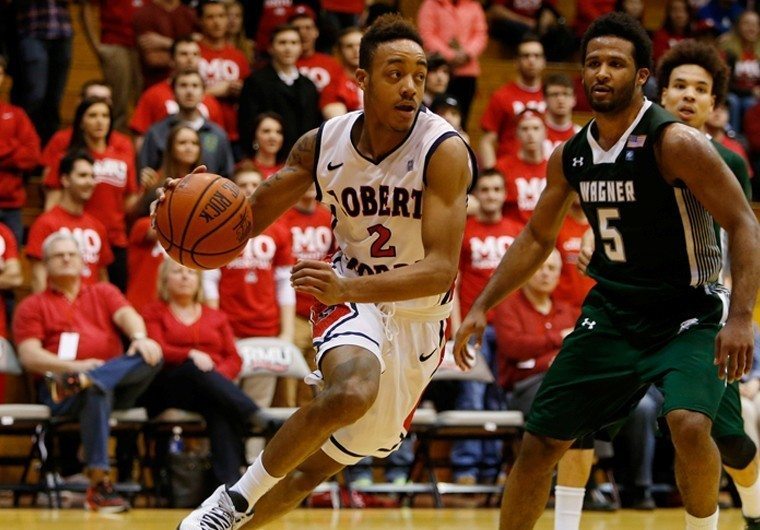 Despite many new faces in last year’s roster, Robert Morris managed to secure 22 wins and capture its eleventh Northeast Conference regular season title.  The Colonials have put together nine consecutive winning seasons and are led by a phenomenal head coach in Andrew Toole who knows how to transition from one graduating class to the next.

The 2014-2015 campaign presented some issues for the Colonials as they had to replace to integral starters in guard Karvel Anderson and point guard Anthony Myers-Pate.  However, Robert Morris welcomed backed nine players this season, including senior forward Lucky Jones, who is averaging 14.4 points per game and leads the Colonials with 6.0 rebounds per game.

The most pleasant surprises for coach Toole has been the development of junior guard Rodney Pryor, who leads the team in scoring with 15.2 points per game, and freshman guard Marcquise Reed, who is second on the team with 14.9 points per game.  In a vote of league head coaches, Reed was recently named the 2015 Northeast Conference Rookie of the Year.  Reed also earned a spot on the 2015 All-NEC Rookie Team and joined Jones and Pryor on the 2015 All-NEC Second Team.

The catalyst for Robert Morris in the conference tournament has been Jones, who is averaging 19.0 points in postseason play on 52.4% shooting from the field.  Over his last seven games, Jones has averaged 17.6 points and 4.9 rebounds per contest while shooting 46.3 percent from the field, 39 percent from beyond the arc, and 93.9 percent at the free-throw line.

While Robert Morris’ offense has found a new gear, the Terrier’s attack continues to struggle late in the season.  Indeed, St. Francis is averaging just 66.4 points on 36.9% shooting from the field and 20.0% from beyond the arc over its last five games.  Overall, the Terriers’ attack is mediocre at best, averaging 69.1 points per game against teams that would combine to allow 69.1 points per game.

Perhaps my favorite aspect of this investment is the fact that St. Francis’  offense is sputtering, while the Colonials’ defense has improved throughout the season. Specifically, Robert Morris is allowing just 64.3 points per game in conference play and a mere 64.0 points on 40.4% shooting over the last five contests.  Let’s also note that the Colonials excel in competitive games as evidenced by their 39-20 (.661) mark under coach Toole in games decided by five points or less.

Finally, motivation could not be higher for the Colonials as they have not forgotten about their upset loss at home to Mount St. Mary’s in last year’s conference championship game.  “Not winning the conference tournament still bothers us, and hopefully that will motivate us going into this season,” coach Toole said.

Be assured that Robert Morris is taking nothing for granted and remains focused on securing an automatic bid to the NCAA Tournament.  My math model favors St. Francis by five points so the line is fair, but everything else points to an extremely competitive game that should stay within the number.  Grab the points and invest with confidence.