North Carolina vs. Duke: Analysis From A Betting Perspective 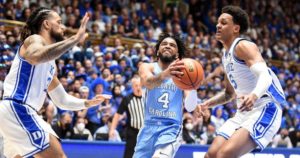 North Carolina has been one of the most dominant teams in college basketball since head coach Hubert Davis shortened his bench and transitioned to a six-player rotation. According to BartTorvik, the Tar Heels are the No. 1 team in the country adjusted for opponents since the calendar turned to March. Davis has modernized the Tar Heels’ style of play by emphasizing more shots from beyond the arc and allowing his guards to play multiple positions.

Indeed, 38.2% of North Carolina’s shots this season have come from beyond the arc, an 11% increase from Roy Williams’ last season in Chapel Hill, and the Tar Heels attempted 91 three-pointers in their first three wins of the NCAA tournament. The Tar Heels should continue to have success from beyond the arc against a Duke defense that ranks 237th in Open 3 Rate.

Caleb Love, R.J. Davis and Leaky Black anchor the perimeter under Davis’ system, while Brady Manek floats from position to position. North Carolina’s versatile bigs allow Davis to put all five players on the perimeter at times, which has caused headaches for opposing defenses.

Rebounding will also be a significant factor in this game. Per ShotQuality, Duke ranks 73rd and 210th in offensive and defensive rebounding, respectively. North Carolina ranks 82nd and fourth, respectively. The Tar Heels do an excellent job crashing the glass and preventing second-chance opportunities for opposing offenses.

With respect to the total in this game, I like the over.  Duke is ranked first in the country in adjusted offensive efficiency, eighth in effective field goal percentage and 2-point percentage.  The Blue Devils have scored at least 78 points in all four tournament wins, including against the best defensive team in the nation in Texas Tech.

North Carolina is 18th nationally in adjusted offensive efficiency.  The over is 5-0 in the past five meetings in this series.  This game should also be fast-paced as Duke grades out in the 32nd percentile in transition defense, while the Tar Heels are even worse (28th percentile), per Synergy.

My math model only favors Duke by 2.7 points in this game. Grab the points with North Carolina as Jeff Keim’s Free Pick Winner for Saturday, April 2.