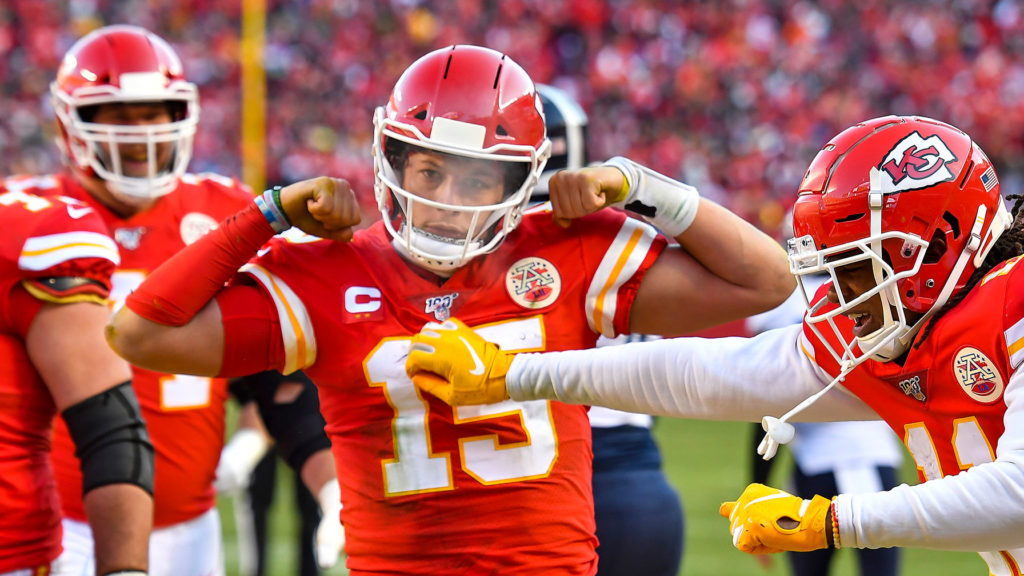 It shouldn’t come as a big surprise that the Kansas City Chiefs are favored to win the NFL title … again. After all, they haven’t changed that much over the offseason and if anything, the NFL Landscape has gotten easier for them.

So, let’s take a few minutes to look at the NFL odds, probabilities, and the state of the union to see if the Chiefs are a good bet to win the Super Bowl this season.

One of the rough parts about winning the Super Bowl is the fact that you get the last pick in the following draft. Still, the Chiefs didn’t do badly in picking up Clyde Edwards-Helaire from LSU. He’ll likely move to the top of the depth chart and make an instant impact, getting the most touches out of seven RBs and FBs on the roster.

He played a pivotal role in LSU’s National Championship victory over Clemson. The 210-pound star caught 5 passes for 54 yards and got 16 touches for 110 yards on the ground. He has the opportunity to become one of the best receiving backs in the league – the Chiefs might have just snagged themselves there very own Christain McCaffrey.

So, with an already loaded offense, the Chiefs might have just added yet another weapon to their powerful arsenal.  Kansas City is primed for another NFL title.

The Kansas City Chiefs are now 9.5-point favorites at Bookmaker to smash the Houston Texans in Week 1. But what does the rest of their schedule look like?

Some months ago, Giants.com released the NFL SoS list from toughest to weakest showing the NE Pats with the most challenging schedule and the Baltimore Ravens with the easiest schedule.

The Chiefs fell right in the middle at No. 18. But, honestly … it’s pure BS. The traditional way of ranking strength of schedule is garbage. How can you rank teams playing against the Patriots in 2020 as the same as having them on your schedule in 2019?

They have been systematically dismantled. No, Tom … and the defense has been upended. So, the better way to do strength of schedule is to look at the win projections of each team on the schedule and then calculate it that way.

In doing so, we find the Chiefs way back at No. 25. So, they have one of the Top 7 easiest schedules in the league.  But the first half of the year isn’t all that easy. They rank No. 15 for the first 8 games. It the second half of the season where it starts to really get soft – they have the No. 29 back-half schedule.

But what about the rest of the AFC West?

The Chargers have an easy schedule, but they are a mess. The Raiders are on the rise, but they have their second consecutive season of schedule hell. The Broncos are a hot mess and have an uber-difficult season ahead of them.

So, when we add together the SoS and the division win/loss projections, we find a clear path to an AFC Division Title.

We are likely to see a showdown between the Baltimore Ravens and the KC Cheifs in the AFC Championship Game. According to the traditional SoS, the Ravens have the easiest schedule in the league.

When you look at the real way to check SoS, they still come in at 27th easiest with the No. 30 back-half SoS. So, the Ravens will be able to coast their way into the playoffs.

I do think that the AFC North is a bit harder. And I think the broncos getting 7.5 wins and the Chargers getting 8 is quite generous over in the AFC West. I would put the Broncs at 5.5  and the Chargers at 6.5 and leave the Raiders at 7.5 which is fair.

The Steelers and Browns seem like fair numbers as well. So, in my opinion, the Ravens have it a bit tougher in their division. That said, I don’t think that will slow them down much unless the Steelers show up to try and usurp them.

All and all, I believe the Title will once again go to an AFC team. And it will be decided by who wins the AFC.