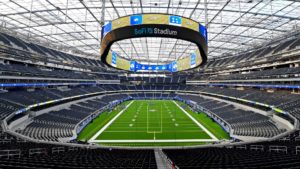 With the Rams’ victory over the Cardinals on Monday night, the NFL’s Divisional Round of the playoffs is all set. Six teams have been eliminated and eight remain to battle for the Super Bowl LVI title. One team remains the overall favorite on the betting board. Is there a team in the field that could sneak in and pull off the upset? Here’s an update of the Super Bowl LVI futures market.

Green Bay opened the season at +900 to win this season’s Super Bowl. They were the favorite entering the playoffs at +350 and remain atop the list heading into the divisional round. QB Aaron Rodgers is having another MVP-worthy season guiding Green Bay to six wins in their final eight games.

The Buffalo Bills are on the board at +500 and for good reason. Buffalo completely manhandled the New England Patriots in their wild-card game last week. The Bills scored touchdowns on their first seven drives of the game. That was a first in NFL playoff history.

The Bills’ defense contained the Patriots and rookie QB Mac Jones and didn’t allow a touchdown until the second half with Buffalo in command. The Bills defense is the best in the NFL and QB Josh Allen threw five touchdowns in the 47-17 win over the Patriots.

Buffalo will have its hands full with Kansas City in this week’s divisional playoff game. The two teams met last year in the AFC championship. They also played earlier this season at Arrowhead Stadium, the site of this week’s game. Buffalo won 38-20 back when the Chiefs were struggling.

Kansas City turned its season around and won 10 of its last 11 games. Since Week 8, the Chiefs’ defense has been one of the best in the league. Patrick Mahomes threw five touchdown passes in roughly 12 minutes in the Chiefs win over Pittsburgh in last week’s wild-card game. That’s why the Chiefs are listed at +400 ahead of Buffalo.

With Green Bay, Kansas City, Buffalo, and defending Super Bowl champion Tampa Bay (+500) all at the top of the board, one team is getting overlooked. The Tennessee Titans are the No. 1 seed in the AFC. They are generating absolutely zero buzz, but they should be.

The Titans are listed at +900 behind even San Francisco (+850) which upset Dallas last week to advance. Tennessee gets All-Pro RB Derrick Henry back in the lineup after he missed a good portion of the regular season with a foot injury. Henry was leading the NFL in rushing – which he did in the previous two seasons – at the time of his injury.

Tennessee was still able to finish fifth in the NFL in rushing averaging 141.1 yards per game. The Titans also had the second-best run defense allowing just 84.6 yards per game on the ground. They finished sixth in scoring defense holding teams to 20.8 points per game.

The Titans went 7-2 at home this year and will have home-field advantage throughout the postseason. Tennessee opened the season given +2500 odds to win this year’s Super Bowl.