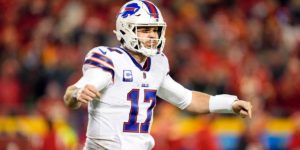 Oskeim Sports takes a look at the NFL futures betting market to highlight the teams that are favored to win Super Bowl LVII.

The Super Bowl LVII futures market has settled down some now that teams are getting into their offseason OTAs and minicamps. Some movement in the quarterback market has had an effect on Super Bowl odds, as have a few big trades. It’s likely that more offseason happenings will have some impact on the futures market. Here’s what it looks like as of early June 2022.

When the first Super Bowl LVII odds were released, it was Buffalo that was installed as the favorite. Bills QB Josh Allen leads a very talented offense and the Bills’ defense is simply outstanding. Many experts believe Buffalo would have beaten both Cincinnati and the L.A. Rams had the Bills been able to get past Kansas City. Buffalo remains the overall Super Bowl LVII betting favorite at +700.

At the close of the 2021 season after Tampa Bay lost in the divisional playoffs to the Rams, Tom Brady decided it was time to retire. Tampa Bay was given +2200 odds to win next year’s Lombardi Trophy. Then, Brady decided to un-retire.

His decision had an immediate impact on the Bucs’ Super Bowl odds. With his top two receivers – Mike Evans and Chris Godwin – back and healthy, Tampa Bay’s offense should continue to reign supreme. The Bucs play in a weak division and the weaker conference. That is why the Bucs are now listed at +750 just behind Buffalo.

Kansas City had been right behind Buffalo in the Super Bowl odds race. That changed when the Chiefs decided to trade WR Tyreek Hill to Miami. The Chiefs needed salary cap room and trading Hill was the best way to get it.

The result of the trade was Kansas City falling on the betting board to +1000. It also didn’t help that Denver traded for QB Russell Wilson, which helped the Broncos go from +2500 to +1600. The Chiefs are now third on the board at +900.

There hasn’t been a repeat Super Bowl champion since Brady and the New England Patriots did it back in the early 2000s. The Rams have the recipe to do so. They return QB Matthew Stafford, who finally got his first Super Bowl ring. The Rams also return one of the NFL’s most feared defenses.

The Rams let LB Von Miller go, but they added LB Bobby Wagner and added another weapon for Stafford – WR Allen Robinson. The roster has all the makings of another Super Bowl run. The Rams are listed at +1200 right now.

The Best of the Rest

Green Bay decided not to bring back WR Davante Adams. Oddsmakers responded with a shrug of the shoulders and have given the Packers +1100 odds. That is because QB Aaron Rodgers is back.

Cleveland traded for former Houston QB Deshaun Watson and almost immediately saw their Super Bowl odds drop from +3000 to +1800. The Browns are now favored to win their division (AFC North) and Watson is among the favorites to win the NFL Comeback Player of the Year award. The Browns are listed just below Denver, the Los Angeles Chargers, and Dallas which are all listed at +1600.