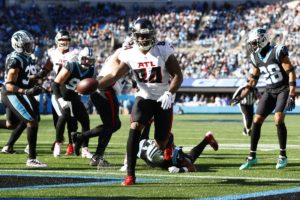 Carolina interim head coach Steve Wilks emphatically denied that the team was in tank mode after trading star running back Christian McCaffrey to the 49ers and the Panthers proved him right with an impressive 21-3 upset win over Tampa Bay.  PJ Walker improved to 3-1 as an NFL starter after an efficient performance in which he completed 16-of-22 passes for 177 yards and two touchdowns with no interceptions.  Walker finished with a Total QBR of 73.9, which is impressive when considering that Kansas City quarterback Patrick Mahomes leads the NFL with a 76.8 QBR.  Prior to getting injured, original starter Baker Mayfield posted a QBR of 15.3, ranking 32nd in the NFL.

Walker is primed for another productive start against an injury-ravaged Atlanta secondary that will be missing three Week 1 starters on Sunday.  Cornerback A.J. Terrell, the team’s first-round draft pick in 2020, did not practice this week and has been ruled out for Sunday’s game against the Panthers.  Atlanta has also ruled out safety Jaylinn Hawkins, who suffered a concussion against the Bengals, on Monday, and cornerback Casey Hayward (injured reserve).  Veteran Cornell Armstrong, who is on the practice squad, will make his first NFL start after 31 career games over four seasons with Miami, Houston, and now the Falcons.

“Just got to see who we got and put them in the best position we can and try not to put them in positions that they can’t handle or that we don’t think they can handle,” defensive coordinator Dean Pees said.  “And try to do the best we can.”  Not including the practice squad, Atlanta has four healthy cornerbacks – Hall, nickel Isaiah Oliver, special teams standout Mike Ford, and Dee Alford, who missed last week’s game and was limited in practice Wednesday and Thursday because of a hamstring injury.

The Falcons have allowed 939 yards after catch this season, the 5th-worst mark in the NFL.  Carolina is averaging 6.8 yards after catch per reception this season, which is the third-most in the NFL.  Carolina wide receiver DJ Moore is primed for another breakout game against an Atlanta defense giving up the most fantasy points per game to opposing wide receivers.

Atlanta is 6-1 ATS this season, tied with the Giants for the best mark in the league, but the Falcons have been outgained in each of their last six games.  Carolina possesses a better yards per play margin (-0.2 vs. -0.8) and shouldn’t suffer a letdown following last week’s upset over Tampa Bay as teams are 21-18 SU and 24-14-1 ATS after facing Tom Brady and the Buccaneers.

Since 2018, the Falcons are 3-11 SU and 2-11-1 ATS at home off a game in which they allowed more than 290 passing yards.  Since 2008, road underdogs of less than a touchdown that won less than seven games the previous season are 296-209 ATS (58.6%).  Atlanta starting quarterback Marcus Mariota is just 3-10 ATS as a favorite of more than three points.  Grab the points with the live underdog and invest with confidence.

Be sure to check back daily for more NFL betting previews and free sports picks.