Can the San Francisco 49ers Repeat as NFC Champions? 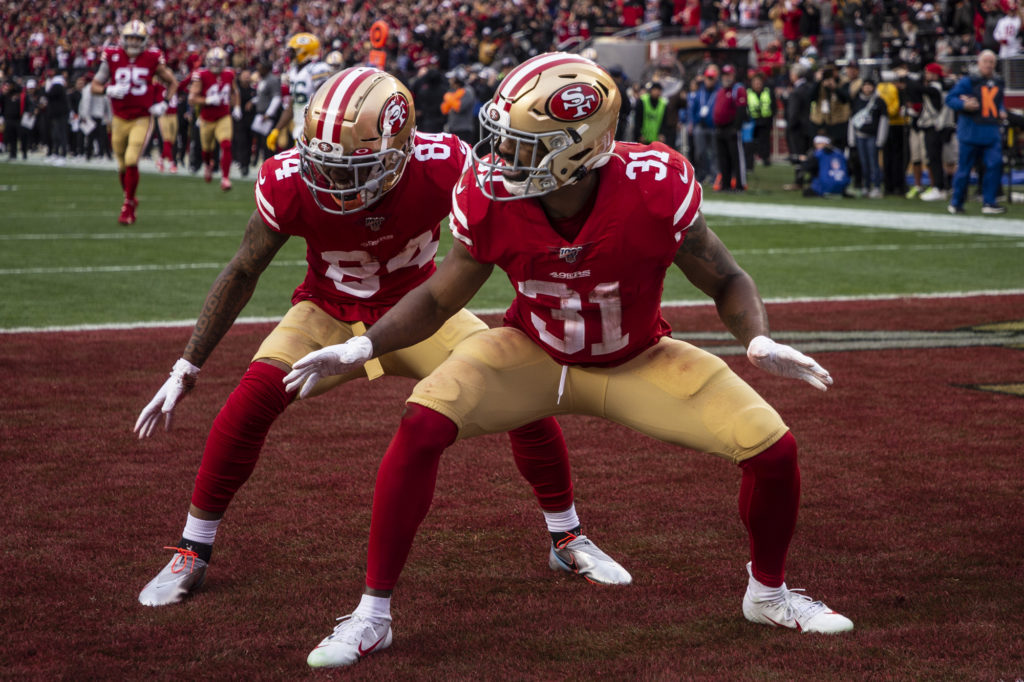 The NFC race in 2020 might be a bit more wide open than that of the AFC. Last year’s champ San Francisco is a favorite, but there are plenty of other teams that could step and take the crown. Don’t forget, there’s a new sheriff in Tampa Bay and his name is Brady.

Bettors that like early favorites will find both the 49ers and the Saints at +500 to win the NFC title in 2020. General manager John Lynch and head coach Kyle Shanahan have built a roster compete for championships for the next several years.

The 49ers had the best defense in the conference giving up just 281.8 yards per game. They also held teams to just 19.4 points a game. The 49ers pass defense is simply outstanding and the core of the defense returns in 2020.

Shanahan uses a stable of running backs and tight end George Kittle (85 receptions, 1,053 yards, 5 TDs) is one of the best at his position. San Francisco averaged nearly 30 points per game last season. Look for that to continue in 2020.

New Orleans, 13-3 last year, lost to Minnesota in the Divisional Round of the playoffs last year. The Saints are extremely talented on offense with future Hall of Fame QB Drew Brees and the NFL’s receiving leader Michael Thomas (149 receptions, 1,725 yards, 9 TDs).

Alvin Kamara is one of the league’s best dual-threat running backs. The Saints averaged 28.5 points per game in 2019 and should be able to do so again in 2020.

Challenger in the NFC South

Now that Tom Brady will be wearing No. 12 in Tampa, the Bucs are now a favorite to make the new seven-team NFC playoffs. The Bucs odds to capture the NFC were reset to +800 now that Brady will be at quarterback.

Head coach Bruce Arians took Arizona to the playoffs in his second season with the Cardinals. The “Quarterback Whisperer,” Brady, and wide receivers Mike Evans and Chris Godwin should make for a very exciting offense in Tampa Bay. How the Bucs pan out will come down to how well they improve on defense.

No team has won back-to-back NFC East titles since the 2003-04 Eagles. The Cowboys placed the franchise tag on their quarterback Dak Prescott (to the tune of $34 million) and could make some noise in head coach Mike McCarthy’s first season. Dallas, +1000 to win the NFC title, missed the postseason last year.

Philadelphia (9-7) held on to win the division last year but lost to Seattle in the Wild Card playoffs. The Eagles return QB Carson Wentz and improved the secondary by acquiring CB Darius Slay in free agency. The Eagles are a +1100 longshot to win the NFC.

Not Sleeping in Seattle

Speaking of the Seahawks, the team hasn’t had a losing season since 2011. Any team with Russell Wilson at quarterback and a Pete Carroll defense stands a chance. The Seahawks have won at least 10 games in all but one season since Wilson became the starter.

With the 49ers expected to repeat as NFC West champs, the Seahawks might have to settle for a wild card again in 2020. At +1100, it will be an uphill battle for Seattle, but with Wilson anything is possible.

NFC Champions: Is the Pack Back?

Green Bay managed to right the ship in 2019, go 13-3, and reach the NFC championship game. With much of the offense and defense returning in 2020, a return is possible. The problem for the Packers (+1200) will be Minnesota.

The Vikings have an outstanding defense and a good running back in Dalvin Cook. Kirk Cousins (26 TDs, 6 INTs) is a playoff-caliber quarterback and the Vikings have won playoff games in two of the past three seasons. At +1400 to win the NFC, Minnesota is more of a longshot than the Packers.

A realistic longshot bet would be one on the Los Angeles Rams. For the most part, the 2020 Rams will feature the same roster as the 2018 Rams that lost Super Bowl LIII to the Patriots. Jared Goff operates head coach Sean McVay’s offense with precision. Goff threw for 4, 636 yards and 22 touchdowns last year.

The big reason why the Rams still have a shot at winning not only the NFC West but the NFC is the defense. This is a veteran unit built around two-time NFL Defensive Player of the Year Aaron Donald. At +1600, a rebound year by the Rams would make for a nice payday as the 2020 NFC champions.