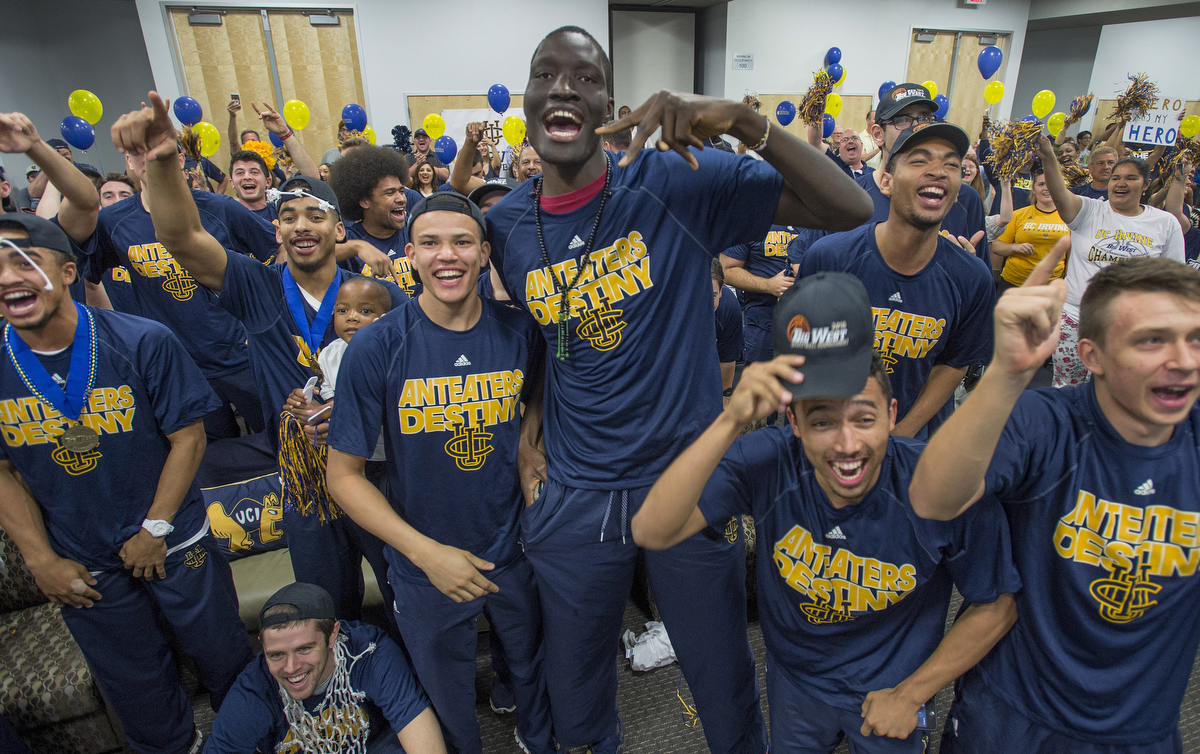 At the outset of the 2014-2015 campaign, the Anteaters were described as being “talented, confident and hungry.” After garnering 21 wins and the Big West Conference title, Irvine proved the prognosticators right. Irvine’s success is predicated upon the health of 7-6, 300 pound center Mamadou Ndiaye, who is averaging 10.4 points per game on 63.0% shooting from the field. Last season, Ndiaye blocked 3.12 shots per game and was the leader of a defense that ranked third nationally in field goal percentage allowed (.374), tied for fourth in blocked shots (224) ands fifth in blocks per game (6.4).

“Ndiaye is one of the most influential players in college basketball in terms of how both teams have to play,” Irvine head coach Russ Turner said. Unfortunately, Ndiaye missed a significant portion of the 2014-2015 campaign with a foot injury, but he returned to action on February 26 and has gradually increased his minutes each game.

Irvine’s frontcourt is further bolstered by leading scorer and rebounder Will Davis II, who is averaging 12.8 points and 7.0 rebounds per game. The 6-8 senior was named Big West Tournament MVP after recording double-doubles in each of the three tournament games, while averaging 15.0 points and 11.7 rebounds. Davis is the first player in history to record three double-doubles in a Big West Tournament.

While Irvine is loaded with big men and are generally committed to pounding the ball inside, the Anteaters have capable perimeter threats that help extend opposing defenses. Irvine’s backcourt begins with sophomore Luke Nelson, who was voted Big West Freshman of the Year and second-team all-conference after leading the Anteaters in scoring last season. Nelson is second on the team in scoring this season (10.5 points per game).

Nelson is joined in the backcourt by junior Alex Young is fourth on the team in scoring (9.6) and is known as being an excellent passer. The Anteaters are 22nd in the nation in three-point shooting due to the long-range threats of guards Travis Souza (45.5%) and Jaron Martin (48.4%).

There is no question that Louisville possesses an advantage at the defensive end of the court as the Anteaters are only 0.9 points per game better than average offensively (67.9 points per game against teams that would combine to allow 67.0 points per game). However, despite that edge, my math model only favors Louisville by 7.5-points and Irvine is 15-5-1 ATS versus teams with a winning record, including 6-2 ATS versus .601 or greater opposition.

Irvine also excels against strong defensive teams as evidenced by its 7-0 ATS mark versus foes who are allowing 64 or less points per game on the season. The Anteaters are also 5-0 ATS in their last five neutral court games and 8-2 ATS in their last ten games off two or more consecutive wins.

Let’s also note that Irvine beat Wisconsin-Green Bay earlier this season, while nearly taking down Oregon (69-67) and New Mexico State (70-67). Finally, Louisville is 0-4-1 ATS in its last five non-conference games, 1-4 ATS in its last five games against .601 or greater opposition and 2-6 ATS in its last eight games overall.  Take Cal-Irvine in the 2nd round of the NCAA Tournament and invest with confidence.