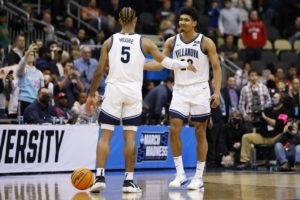 Jeff Keim previews Thursday’s NCAA Tournament Sweet 16 round game between Michigan and Villanova.  The handicapping experts at Oskeim Sports have you covered with the information you need before betting on the NCAA tournament.

This Sweet 16 affair is a rematch of the 2018 NCAA Tournament championship game won by Villanova 79-62.  Since 2014, Michigan and Villanova have met three times, with all three games finished under the posted total.  However, Michigan games are 20-12-1 OVER this season, including 8-2 in the last ten.

The Wildcats have made 36% of their contested 3s in the NCAA tournament and are the best free-throw shooting team in the country (82.61%). During its current seven-game winning streak, Villanova’s opponents have made just 26.6% of their three-point attempts. The Wildcats are led by freshman Collin Gillespie, who is averaging 17.0 points and 4.0 assists per game.

Michigan has reached the Sweet 16 despite receiving limited help from point guard DeVante’ Jones, who missed the first-round game against Colorado State and the entire second half against Tennessee. Jones is in concussion protocols and is listed as questionable for tonight’s game.

Hunter Dickinson is playing at an exceptionally high level for the Wolverines, averaging 8.5 rebounds and 2.5 blocks per game in the NCAA tournament.  In addition, double-digit seeds are 14-4-1 ATS in the Sweet 16 round of the NCAA tournament since 2011, including 3-0 ATS last year.

However, Big Ten Conference teams are just 3-8-1 ATS as underdogs in the Sweet 16 round of the NCAA tournament. Lay the points with Villanova as Jeff Keim’s Free Pick Winner for Thursday, March 24.

Be sure to check back daily for more free sports picks from the betting experts at Oskeim Sports, your #1 Sports Picks Resource.