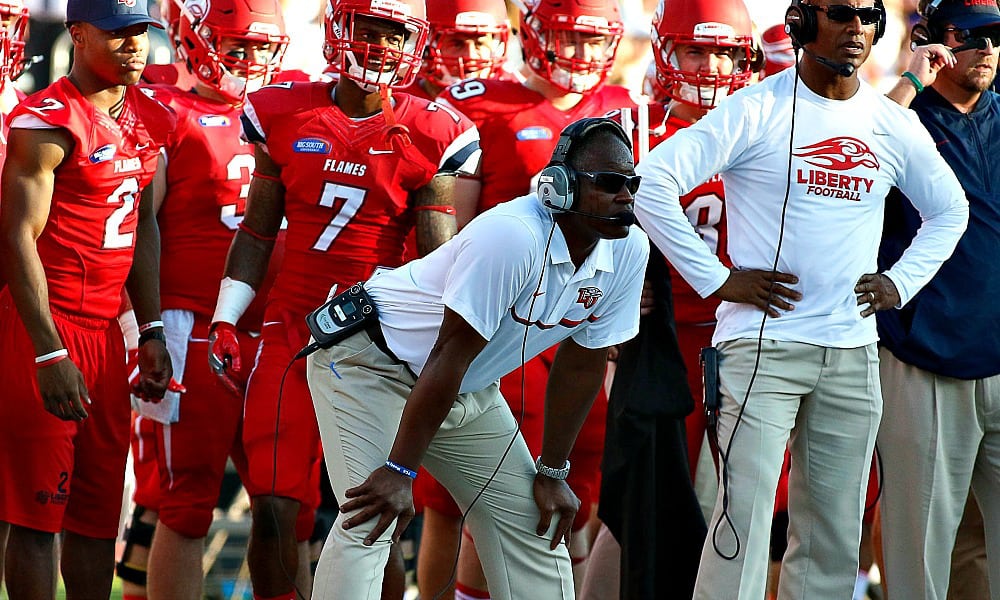 Oskeim Sports previews the college football game between Old Dominion and Liberty on Saturday, September 1.  Oskeim recommends grabbing the points with the Flames as one of his free NCAA Football picks in Week One.

Liberty competed at the FCS level for the past thirty years, compiling a steady 184-152 overall record and 21 winning seasons.  The Flames captured at least a share of eight conference titles in the Big South Conference where they went 55-23 since 2002.

Liberty is a provisional FBS member this year and will become a full FBS member in 2019, which includes bowl eligibility.  Head coach Turner Gill has done an outstanding job in Lynchburg during his seven-year tenure and possesses FBS coaching experience with previous stops at Kansas and Buffalo.

The school has invested heavily in the football program, most recently spending nearly $200 million on the athletic facilities.  Gill was the highest-paid coach at the FCS level last season and enters the 2018 campaign with 81% of last year’s production.

The Flames have won fourteen of their last 15 home openers, including five straight by an average margin of 32.6 points per game.  Liberty was laying more than four touchdowns in last year’s season opener against Baylor and left Waco with a 48-45 win.

Quarterback Stephen Calvert threw for a school-record 447 yards and returns in 2018 with eight offensive starters.  The junior gunslinger finished last season with 3,363 yards and 29 touchdowns, both of which were program records.

Calvert returns all four of his favorite targets from 2017, including star wide receiver Antonio Gandy-Golden.  Gandy-Golden led the team with 69 receptions for 1,066 yards (15.4 average, 10 TD) and is expected to play Saturday despite being injured in a car accident over the summer.

He missed the first two weeks of preseason camp but did participate in Liberty’s final scrimmage.  “It went good.  Coach KD is really pushing me and pushing me to run and finish everything because I’ve got to be in shape for the game,” Gandy-Golden said.  “I didn’t really run as much as everyone else during camp.”

Reports from campus indicate that Gandy-Golden has been working on conditioning and should be close to 100% for Liberty’s season opener.

The Flames possess an excellent offensive line that returns six players who made at least six starts last season (80 career starts combined).  The Flames averaged 449 yards per game last season (best under Gill), including 310 yards through the air and should once again produce solid numbers despite playing a more difficult schedule.

Liberty returns seven starters on defense and should resemble the solid defensive units produced by Gill in his first five seasons (big decline in 2017).  Seven of their top ten tacklers return, making the Flames’ front seven both experienced and talented.

Old Dominion looks to rebound from a disappointing 5-7 season and possesses the experience (16 returning starters) to make some noise in Conference USA this year.  The Monarchs lose their all-time leading rusher (Ray Lawry) and projected starter, Jeremy Cox, has been nursing a sprained ankle.

“That’s a nagging injury for a running back,” head coach Bobby Wilder said of Cox.  Redshirt junior Kesean Strong was listed as the No. 1 back on the depth chart but is an unknown commodity due to injuries that caused him to miss last season.

From a technical standpoint, Old Dominion is a money-burning 3-10 ATS in September affairs and 3-12 ATS in its last fifteen non-conference games, whereas the Flames are a perfect 11-0 ATS in all line-games since 2007!

Finally,  my math model favors Old Dominion by less than one point so we are getting excellent line value on the live home underdog.  Grab the points with the Flames as one of Oskeim Sports’ NCAA Football Picks on Saturday, September 1.

Be sure to check back daily for more free NCAA Football picks from the #1 documented sports handicapping service in the industry – Oskeim Sports!