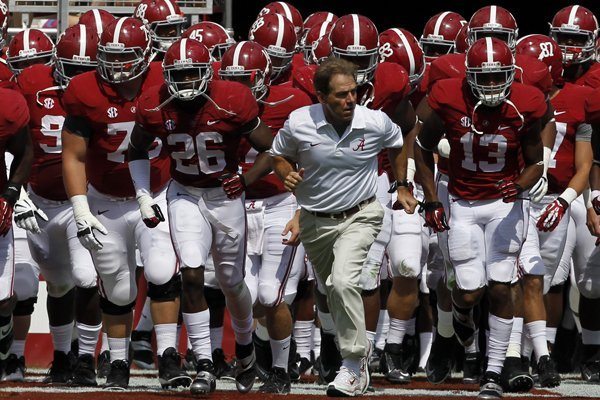 Despite defeating South Carolina and Arkansas earlier this season, I always felt that Texas A&M was a house of cards built upon a woefully inadequate defense. Following consecutive blowout losses to both Mississippi State (48-31) and Mississippi (35-20), the Aggies have finally been exposed as an overrated team living on borrowed time.  With that said, I do have a lot of respect for Texas A&M head coach Kevin Sumlin, who is 4-0 SU and ATS in College Station following an upset home loss with an average margin of victory of 37 points per game.  I hope you enjoy the football betting preview below.

The situation also favors Alabama as the Aggies are traveling for the fourth time in five weeks, whereas this is the Tide’s only home game in a seven-week span so we can expect a motivated effort from coach Saban’s squad this afternoon.  From a technical standpoint, let’s note that Texas A&M is a money-burning 1-9 ATS versus teams with a winning record, including 0-7 ATS versus teams with a win percentage exceeding .750.  The Aggies are also 26-47 ATS on the following one or more consecutive losses, 13-31 ATS as road underdogs and 2-9 ATS after the first month of the season, whereas Alabama is 35-20 ATS after failing to cover the point spread in two or more consecutive games.  Lay the points with Alabama and invest with confidence.

Be sure to check back on a daily basis for more NCAA Football Betting Previews and free sports picks.  Oskeim Sports is the home of the best betting previews in the industry, bar none.