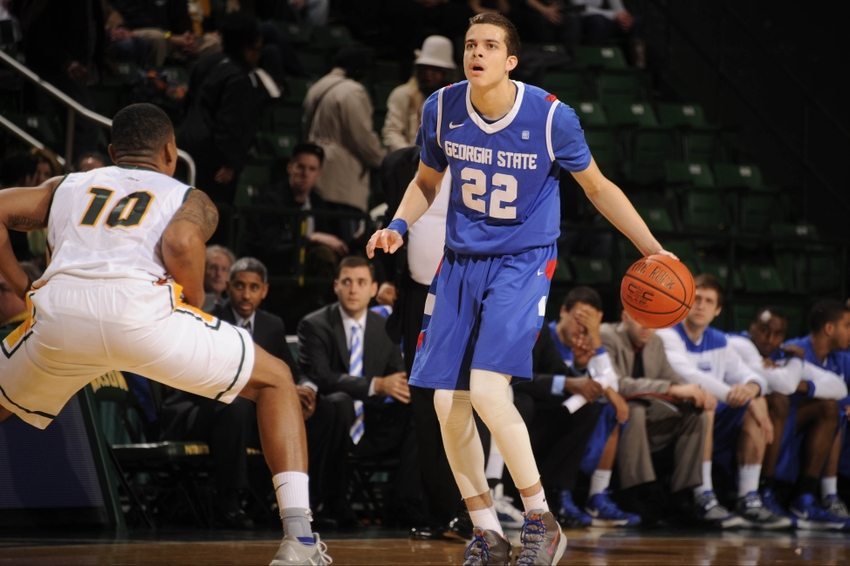 Following six straight games on the road, Georgia State finally returns to the friendly confines of the Georgia State Sports Arena to host one of the top mid-major programs in the country, Wisconsin-Green Bay.  The Panthers find themselves in good spirits after winning four consecutive games, including sweeping three games at the CBE Hall of Fame Classic in Rochester, Michigan.

After being upset by Louisiana in last year’s Sun Belt Conference title game, the Panthers have used that painful experience as a motivating factor in the 2014-2015 campaign.  “It’s inspired our spring workouts,” Georgia State head coach Ron Hunter said.  “It’s inspired our summer workouts.  It’s made us better . . .Sometimes you’ve got to go through a little pain to have good things happen to you . . .Those guys were really hurt by what happened.”

The good news for the Panthers is that they return one of the best backcourts in NCAA basketball with junior wing R.J. Hunter and senior point guard Ryan Harrow. Hunter averaged 18.3 points per game last season and is currently averaging 22.9 points per game in 2014.  Scouts reported that Hunter looked like be belonged while competing at LeBron James’ and Kevin Durant’s camps over the summer, and many believe that he will forego his senior season for the NBA Draft.

Harrow averaged 17.8 points per game last year and is currently scoring 20.3 points per game this season.  Harrow transferred from Kentucky to Georgia State prior to last year and had excellent chemistry with Hunter in the backcourt. “He now has back-to-back years in the same system,” coach Hunter said.  “His comfort level is going to make him a better player  . . .Ryan is shooting the ball much better.  We’ve spent a lot of time working on that jump shot.”  The hard work and dedication over the summer has paid dividends as Harrow is shooting 51.4% from the field though the first seven games this season.

Georgia State’s elite backcourt is further enhanced by the presence of redshirt junior Kevin Ware, who suffered a broken leg in Louisville’s NCAA Tournament win against Duke in the Elite Eight.  Ware was a valuable member of Louisville’s 2012-2013 national championship run, and reports indicate that the 6-2 guard is 100% healthy. Ware is currently third on the Panthers in scoring with 8.0 points per game, and his production will only continue to improve as he becomes more comfortable with coach Hunter’s schemes.

Georgia State is averaging 78.0 points per game on 50.8% shooting from the field (19th-best in the nation) and 41.2% from beyond the arc (30th-best in the nation). Both percentages lead the Sun Belt Conference.  I also like the fact that the Panthers rank 14th in college basketball in turnovers, giving up the ball just 10.7 times per game.  The Panthers finished second in NCAA basketball last year averaging just 8.1 turnovers per game and were 31st with 7.6 steals per contest. This season, Georgia State ranks 12th nationally averaging 10.0 steals per game.

Under coach Hunter, Georgia State is 36-10 (.782) at the Georgia State Sports Arena, and the Panthers are currently riding a 14-game home-court winning streak (13th-best in NCAA basketball).  “It is great to finally get home, though Thursday will be no easy challenge,” Hunter said.  Green Bay has an excellent program, but I know that our fans and students will come out in force to give us the great home court advantage that we appreciate and have become accustomed to.”