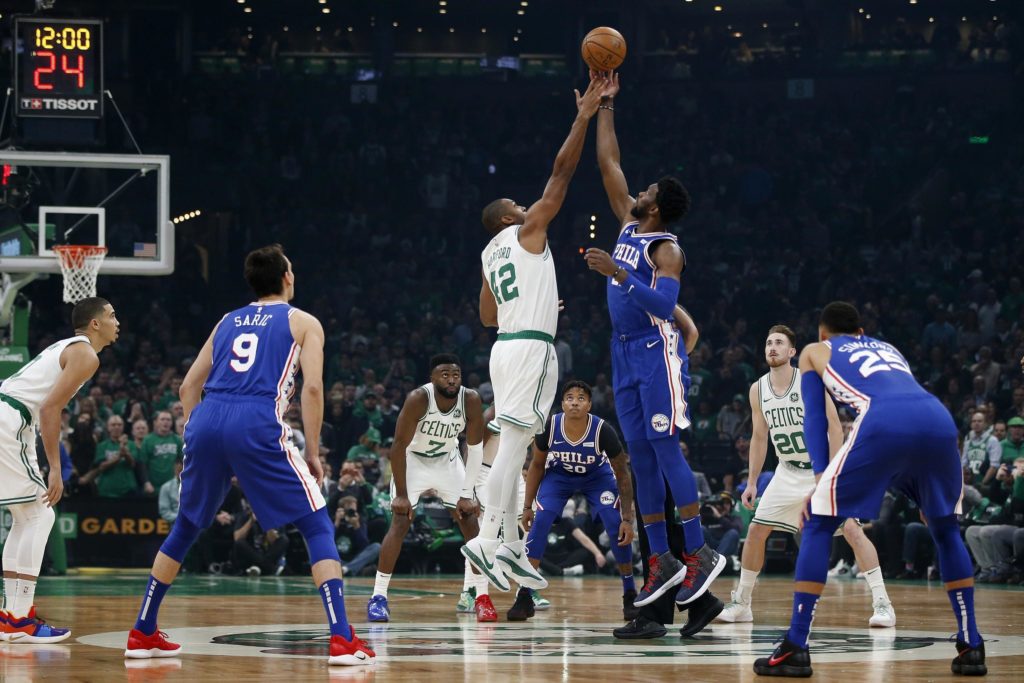 Like the other major sports leagues in the U.S. and around the world, the NBA is on hiatus due to the spread of the coronavirus. Utah Jazz center Rudy Gobert tested positive for the disease prompting the cancellation of the NCAA tournament and the suspension of the NBA season.

As the calendar flips to April, the big question is will the NBA finish the 2019-20 season? It appears entirely possible, but how exactly will have to be determined. There have been a few solutions mentioned thus far.

Which model is used to complete the 2019-20 NBA season depends on when officials believe the threat of the spread of the COVID-19 virus is minimized. At the outset of the virus’s spread in the U.S., the Center for Disease Control (CDC) recommended no gatherings of more than 50 people for approximately eight weeks. That means any restarting of the NBA season would come sometime in May.

Playoffs Now
One popular idea circulating is to simply end the regular season as it stands and begin the postseason right away. The top eight teams in each conference would qualify and would run through a normal playoff scenario. All series would be best-of-seven and the NBA Finals would probably end in August.

Finish Regular Season
There is the possibility – again depending upon when the league can resume play – that teams finish their regular season schedules and then move on to the playoffs. This option would take the most time, of course. Teams have roughly 14 games remaining in the regular season. All playoff series are best-of-seven, so in this scenario, the season might be completed by September or even later.

If that were the case and the 2019-20 season did end in September, it is likely the league would delay the start of the 2020-21 season until December or January of 2021. Remember, the league did start the 2011-12 season late due to the lockout.

Play-In Tournament
One proposal to speed up the finish of the NBA season is the play-in tournament. The league is actually considering this idea for future playoffs. This season could be the test run that the idea needs.

Depending upon when play could start, using the play-in idea would probably mean an NBA season that runs until at least August.

NBA Tournament
Another idea being floated around is simply a take on the NCAA tournament, which was canceled this year for the first time ever. There are a few ways a tournament could be held. All of them would assume that the regular season is over.

One option would be to seed all 30 teams, No. 1 through 30, based on their final records. The top two seeds – which would be Milwaukee and the Los Angeles Lakers – would receive byes. The remaining teams would play in the first-round of a single-elimination format. Once there were two teams remaining, the champion could be determined by a single game or the teams could play a best-of-three, -five, or –seven series.

The other option for an NBA tournament would be to keep the teams aligned by conference. The team with the best record in each conference receives a bye and the remaining 14 teams play in the following fashion: No. 2 plays No. 15, No. 3 faces No. 14, and so on.

The tournament is single elimination again until each conference champion is crowned. The final two could play a single game or a series. Like any of the other ideas, what actually happens is going to depend upon the assessment of the spread of the coronavirus.

The Reality
All of the playoff scenarios are certainly worthy solutions to the NBA’s 2019-20 season. The bigger problem is the coronavirus and public safety. The league itself has had a number of players test positive for the virus. Any thoughts of resuming play will likely involve testing of players, coaches, and other essential staff members.

Timing is the biggest issue. NBA commissioner Adam Silver has discussed a “drop dead” date of Labor Day to have the NBA Finals completed. If that is the case, it means teams need to resume playing games by July 1. If teams are playing on July 1, practice facilities will have to be opened sometime in June.

As previously mentioned, it is possible that the worst of the virus’s effects leave the U.S. by May and life as most Americans know it will get back to relatively normal. Even if the league is able to resume play by July 1, there are a wealth of other problems to deal with.

Scheduling the remaining games could be a logistical nightmare as the rest of the sports world resumes play too. There is also the 2020 NBA draft to consider. What happens to the free agency period? What about the summer league?

The worst-case scenario, of course, is that the league shuts down the 2019-20 NBA season. Since the league was founded as the Basketball Association of America (BAA) in 1946, the NBA has never ended a season prematurely. Coaches, players, and fans around the world are hoping this isn’t the first.