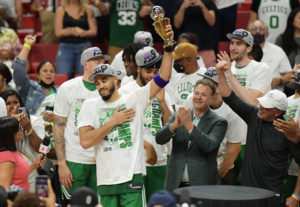 Before placing a wager on the 2023 NBA Finals between the Boston Celtics and Golden State Warriors, let the experts at Oskeim Sports give you profitable NBA Finals betting nuggets that are primed to deliver the winners you are looking for.

The NBA Finals are here and each year it presents bettors with numerous opportunities for betting success. With a potential seven games on tap, bettors can make or break an NBA betting season. When thinking about betting the NBA Finals, there are a number of things to consider. Here are a few.

So, Boston had to go seven games with Miami to get to the NBA Finals. Teams that win a Game 7 do not do so well in Game 1 of their following series. The last 81 times this has happened in the NBA playoffs, the Game 7 winners have lost 49 times (61 percent). Those teams also only win their next series 41 percent of the time.

With Steve Kerr as their coach, Golden State is 21-2 SU in playoff Game 1s. The Warriors are also 9-2 ATS when playing as a single-digit home favorite in Game 1 of a playoff series. Golden State hasn’t played since May 26 and that rest advantage may work in their favor.

Last year, the Phoenix Suns won Game 1 and 2 before losing four straight to Milwaukee. From 2017 to 2020, the team that won Game 1 went on to win the NBA championship.

It’s no secret that the Under is a trend during the NBA playoffs. The pace of games slows down tremendously as teams understand that they face elimination. Usually, teams average about 2.5 fewer possessions per game during the postseason. That means fewer opportunities to score which translates into fewer points.

Based on the results of Games 1 and 2, series prices will adjust. With a Boston loss in Game 1, their new series odds may move closer to +200. With another loss in Game 3, those odds could approach +300. Bettors considering backing a team that is down in a series should only do so because that team is playing far below expectations. The bottom line is that bettors can often find better series pricing after a few games have been played.

Zig Zag theory in betting is essentially just betting the opposite of what happened in the previous game. The thought is that teams will bounce back quicker in the playoffs knowing if they don’t they may be eliminated. Blindly following this strategy in the NBA Finals doesn’t really work, but there is one situation where there is a trend.

NBA playoff teams seeded in the top-3 – which both Boston and Golden State are – do very well against the spread when coming off a Game 1 loss. Since 2005, the Game 1 loser has come back to cover the spread in Game 2 64 percent of the time (30-17 ATS).