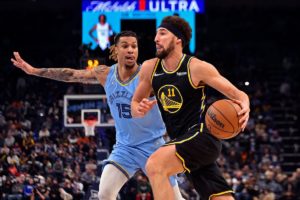 Jeff Keim, the founder and CEO of Oskeim Sports Consulting, provides a free betting preview in Sunday’s second-round playoff game between the Golden State Warriors and Memphis Grizzlies.  Be sure to check out the winning sports picks from the award-winning handicappers at the online store.

Golden State took care of the Nuggets in the first round of the playoffs, winning the series 4-1.  Memphis struggled to get past the Timberwolves before ultimately prevailing 4-2.  The Warriors posted an Offensive Rating of 121.9 according to NBA Advanced Stats, which is No. 1 in the playoffs to date.  Golden State shot 42.2% from beyond arc in Round 1 and shot 51.5% overall from the field against the Nuggets.

The Warriors have not played since Wednesday so they have a significant rest advantage over the Grizzlies, who won Game 6 in Minnesota on Friday night.  Despite winning Games 3, 5 and 6, Memphis trailed by as many as 21, 15 and 10 points, respectively, in those contests.  The key to the Grizzlies’ success has been their performance in the fourth quarter, where they rank No. 1 in scoring (averaging 33 points per game).

The under is 58-24 in second round playoff games with totals of at least 220 points.  This situation is 40-16 UNDER since 2018 and 53.7% of the games finished under the total by seven points or more.  Golden State is 25-16 UNDER versus teams with a winning record this season, including 16-7 UNDER versus teams that are outscoring opponents by 3-plus points per game.   Memphis is 20-8 UNDER at home versus Pacific Division opponents over the last three seasons and 6-1 UNDER in its last seven conference semifinals games.

Finally, the under is 8-2 in the past ten meetings in this series, including 5-1 UNDER in the previous six clashes in Memphis.  Take the under 220.5 points as Jeff Keim’s Free Pick Winner for Sunday, May 1.

Be sure to visit daily for more betting previews, free pick winners and best bets from the most successful group of handicappers in the industry.