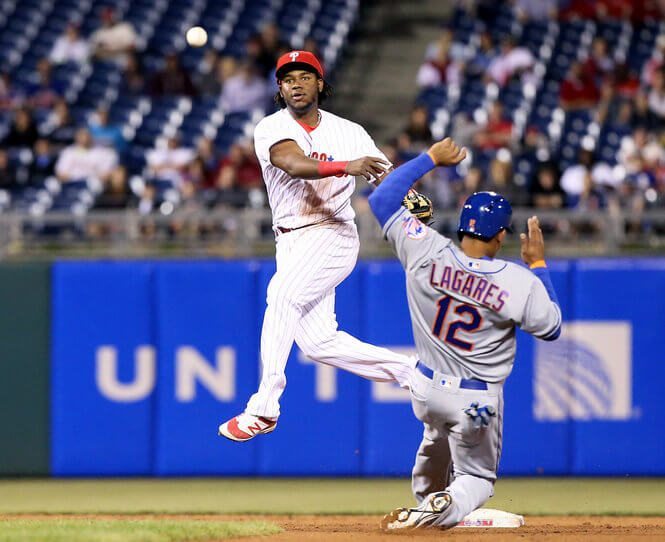 Eickhoff also enjoyed a strong June wherein he posted a 2.23 ERA and 3.95 WHIP. The talented hurler also owns a 2.81 ERA and 1.03 WHIP in five career starts against the Mets, including two strong outings earlier this season.

The Mets are already missing third baseman David Wright, who is out with a herniated disc, and first baseman Lucas Duda, who is on the 15-day disabled list with a stress fracture in his back. The most important absence for the Mets is center fielder Yoenis Cespedes, who has been out since July 8 with a quad injury.

Cespedes is listed as questionable for tonight’s game, but reports indicate that he could be placed on the 15-day disabled list if significant improvement isn’t shown by today. I would be surprised to see the slugger in the lineup tonight.

Returning to Eickhoff for a moment, his success has been predicated upon a solid K-BB rate, together with vastly improved exit velocity suppression which is synonymous with control and command. Eickhoff’s arsenal is very good based upon swinging strikes and ground ball z-scores (plus offerings with his curveball, slider and sinker).

In 2015, Eickhoff included the highest rate of swinging strikes among any slider (minimum 100 pitches). Indeed, he posted a solid 3.25 FIP with his slider last season, good for 27th in baseball, and Eickhoff has significantly increased his slider usage over the last two months.

Consider that Eickhoff had 18 quality starts in his first 25 attempts of his career entering tonight’s game, which tied Hall of Fame right-hander Robin Roberts and right-hander Art Mahaffey for the most quality starts through 25 outings in a Philadelphia career.

Those statistics are substantiated by disturbing peripherals, including a 5.44 FIP, a 5.07 xFIP and a 5.44 SIERA. His strikeout numbers are down while his walk and home run rates are both up. A pedestrian 4.1% K-BB% further suggests the 26-year-old is better suited for the bullpen.

Verrett has yielded 19 runs on 31 hits and 19 walks over 30 1/3 innings as a starter, but posted a 2.49 ERA in 15 relief appearances prior to entering the rotation. The Mets are 0-4 in Verrett’s last four starts and 1-4 in his last five road starts, whereas Philadelphia is 5-2 in Eickhoff’s last seven outings.

In contrast, the Mets are a money-burning 6-13 in their last 19 division affairs, 3-7 in their last ten games versus teams with a losing records and 1-4 in their last five road games. With home teams standing at 10-1 in umpire Jordan Baker’s last 11 games behind the plate, take the Phillies to win game 2 of this series and invest with confidence.