Making the Case for the Denver Broncos Over 10 Wins 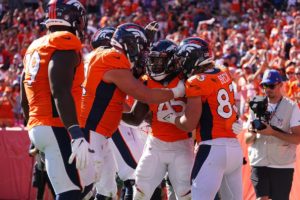 The Denver Broncos have had 11 different starting quarterbacks since Hall of Famer Peyton Manning retired in 2015. The franchise has had its share of ups and down since – mostly downs – but has good reason to be looking up in 2022.

The Broncos brass went out and got the quarterback they believe can return the franchise to glory – Russell Wilson. The 10-year NFL veteran takes over the Denver offense and immediately makes the Broncos a Super Bowl contender. Remember, he took Seattle to two straight Super Bowls early in his career. Wilson won one of those.

Since 2016, Wilson ranks sixth in passing yards (23,085) and third in passing touchdowns (186). Those numbers are outstanding on their own, but consider that the Seattle offense ranked 31st out of 32 NFL teams in total passing attempts (3,124) during that period.

Through his first ten seasons, Wilson has 292 career touchdown passes. Only Manning (306) has more in his first ten NFL seasons. Wilson went over 4,000 yards four times in Seattle and Denver’s offensive line, while not the best in the NFL, will be the best that Wilson has ever had.

Wilson is not the only reason why the Broncos will go Over their win total of 10 this season. The Denver defense is one of the best in the NFL. The Broncos ended last season ranked No. 3 in scoring defense giving up an average of 18.9 points per game. They finished in the top 10 in passing defense (8th) and total defense (8th). Young stars like Patrick Surtain and D.J. Jones return and the Broncos brought in pass rusher Randy Gregory in the offseason.

Denver went 7-10 last season with an offense that didn’t even average 20 points per game. With the quarterback position in limbo between Teddy Bridgewater and Drew Lock, Denver’s offense revolved around the run. Both Melvin Gordon III (918) and Javonte Williams (903) surpassed the 900-yard mark on the ground. With Wilson under center, you can bet the Broncos aren’t simply going to turn around and hand off to Gordon and Williams. Both will be important pieces of the puzzle, but the Broncos’ passing game will be much better in 2022.

What also helps the Broncos in their quest for 10-plus wins is the schedule. Denver will play in the toughest division in the NFL – the AFC West. That means two games each against Kansas City, the Los Angeles Chargers, and Las Vegas. Last year, Denver went 1-5 in the division. That number should change in 2022.

Outside the division, the Broncos have games against Seattle, Houston, the New York Jets, Jacksonville, and Carolina. Wilson and Denver actually open the 2022 season at Seattle on Monday night. After Wilson’s former team, the Broncos get Houston at home. Those are two very winnable games that could set up Denver for success this season.

Keep in mind that Wilson led Seattle to the playoffs in eight of his ten seasons and in each of those eight seasons, the Seahawks won at least 10 games. Also, don’t discount the success that veteran quarterbacks have had in their first season with a new team. Last year, it was Matthew Stafford with the Rams going Over 10 wins. In 2020, Tom Brady moved to Tampa and went Over 10 wins. Philip Rivers did it in Indianapolis in the same year.