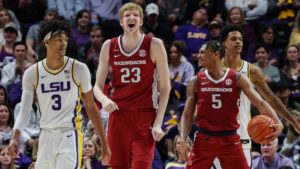 It’s coming soon. The calendar will turn to March and the college basketball madness will begin. Conference tournaments will start and, before you know it, Selection Sunday will be here. The familiar names like Gonzaga (+600) are still among the favorites to win it all this year. What about the sleepers?

Fans and bettors love the NCAA tournament because of its upsets. They are what make March Madness even madder. Many of the Cinderellas that pull upsets eventually get beat, but are there any legitimate sleeper picks that could make a run through the tourney and win it all? Here are four teams with the potential to do so.

Eric Musselman worked his magic at Nevada and now he’s doing it at Arkansas (21-6). The Razorbacks are second in the SEC with a 12-4 record and trail Auburn, a team they beat 80-76 two weeks ago. Arkansas also has wins over No. 16 Tennessee and No. 6 Kentucky.

Guard JD Notae averages 19.1 points per game and Arkansas has plenty of depth and experience. Don’t forget, Musselman took his team to a second-place finish the SEC last year and all the way to the Elite Eight.

Pitt transfer Au’Diese Toney averages in double figures (10.1 ppg) as does South Dakota transfer Stanley Umude (11.2 ppg). Musselman’s team can match up with just about anyone and, with the experience gained last year, there is good reason to believe the Hogs can get back to the Elite Eight and even deeper.

Even though head coach Chris Beard left to take the job at Texas, the Red Raiders are still one of the most dominant defensive teams in the nation. The ninth-ranked team in the country, Texas Tech allows just 60.7 points a game this season. That ranks 13th and defense can win championships. Remember, Texas Tech played for a national title in 2019.

The Red Raiders have proven they can play with anyone. They have wins over Kansas and two wins each over Baylor and Texas. All three teams were ranked in the AP top 25. The Red Raiders are currently third in the Big 12 and should earn a top-3 seed in the NCAA tournament.

It’s hard to imagine a team with two national titles in the past six years as a sleeper, but Villanova was never among the favorites to win it this year. The Wildcats are 21-7 overall and 14-4 in Big East play. They had a recent five-game win streak in which they beat No. 17 UConn and No. 8 Providence. They will play the Friars once more before season’s end.

Guard Collin Gillespie leads the team in scoring averaging 16.6 points per game. Head coach Jay Wright’s team is balanced and plays good defense (63.4 ppg). With less focus on them, the Wildcats could sneak in and win it all.

The SEC is loaded this year and the Vols are a team that has proven it can play with the big dogs. The Vols have a non-conference win over Arizona and recent conference wins over No. 4 Kentucky and No. 3 Auburn.

The lineup is deep (10 players average double-digit minutes per game) and talented. Guards Santiago Vescovi and Kennedy Chandler each average 13.6 points per game and the Tennessee defense is one of the best in the nation. The Vols are a top-25 defensive unit allowing 62.8 points per game for the season.

Tennessee is 21-7 overall and 12-4 in the SEC. They are tied with Arkansas and Kentucky for second behind first-place Auburn. Like Texas Tech, the Vols are a likely No. 3 seed in the NCAA tourney where they could do plenty of damage.