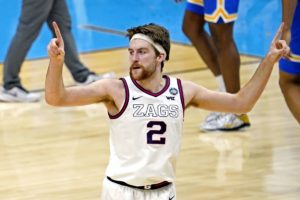 With the calendar turning to January, the fall to winter sports shift begins. College basketball gets into its conference schedules and before you know we’ll be seeing conference tournaments begin at the end of February.

As the college basketball season heats up, it’s time to take a look at the race for this year’s National Player of the Year Award. Remember, there are actually two awards – the Naismith Award and the Wooden Award. We will treat them as the same since typically one player wins both awards in a given year.

Gonzaga’s Drew Timme was the favorite entering the season and remains in that role listed at +650. He is unquestionably the Bulldogs leader and best player. Timme has cooled off somewhat scoring just 14 and 12 points in Gonzaga’s last two games before the New Year. Timme is averaging 16.7 points and 5.9 rebounds per game so far this season.

Along with Timme is Ohio State forward E.J. Liddell. The Buckeyes junior averages 19.6 points, 7.3 rebounds, and shoots 51.8 percent from the floor. He scored 14 points, grabbed 14 rebounds, and dished out six assists when Ohio State upset Duke earlier this season. Ohio State is 9-2 and ranked 13th in the nation. Liddell, who is also listed at +650, is the reason why.

Duke freshman Paolo Banchero is the Blue Devils go-to guy. At 6-10, Banchero can score inside and out and is averaging 17.1 points per game so far. He averages 7.5 rebounds a game and is a very strong defender. Duke is ranked No. 2 in the nation and they should be a contender for the national title which will make Banchero’s case for a national player of the year award even stronger. He is listed at +800.

Illinois 7-footer Kofi Cockburn definitely has player of the year numbers. He is averaging 22.5 points and 12.5 rebounds per game thus far for the 11-3 Illini. Illinois is 4-0 so far in the Big Ten and a deep run in the NCAA tournament would only bolster Cockburn in the race for player of the year. He is listed at +900.

Johnny Davis is given the same odds as Cockburn right now, but he has yet to become a household name. The Wisconsin guard averages 22.6 points per game for the 23rd-ranked Badgers. He is starting to gain some attention especially after Wisconsin upset No. 3 Purdue.

Also in the Big Ten is a true longshot for player of the year – Iowa’s Keegan Murray. The 6-8 forward is actually the nation’s leading scorer. Murray averages 24.5 points per game and also grabs 7.9 rebounds. He shoots 59.5 percent from the field and can play inside or out. Murray is listed at +1000 and his success relies on the performance of Iowa this season. So far, the Hawkeyes are just 1-3 in Big Ten play and 11-4 overall.