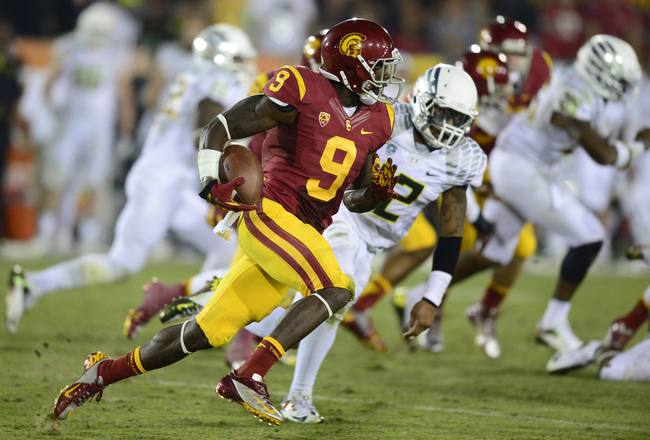 Don’t look now but USC  has reeled off three consecutive SU and ATS wins over Utah (19-3), Oregon State (31-14) and California (62-28).  If it were not for a couple of missed field goals against Notre Dame, the Trojans would be a perfect 5-0 SU and ATS under interim head coach Ed Orgeron. Regardless, USC has regained its swagger and enters tonight’s pivotal Pac-12 contest with a surging offense that is averaging 37.3 points over the last three games, including 5.1 yards per rush play, 9.6 yards per pass attempt and 7.0 yards per play.  The Trojans’ explosive attack is best epitomized by the fact that they are averaging an incredible 11.1 yards per point over the last three weeks and 12.8 yards per point against conference opponents.

From a technical standpoint, what we want to do is invest against any college football favorite off an upset win over an undefeated opponent (5-0 or better) as these teams are a money-burning 55-72-1 ATS since 1980, including 17-30 ATS on the road.  Better yet, if our ‘play against’ team is matched up against an opponent that allows less than 25 points per game on the season, they drop to 2-12 ATS. Finally, if our ‘play against’ team has a winning record after week six of the regular season, they plummet to 1-11 ATS.  With Stanford coming off a shocking 26-20 win over previously undefeated Oregon last week, the Cardinal fall squarely within the foregoing system.  Let’s also note that USC is a profitable 10-2 ATS at home following a blowout win on the road by 28 or more points, 21-9 ATS at home after scoring 42 or more points and 17-4 ATS after covering the point spread in two or more consecutive games.