How the Philadelphia Phillies Reached the 2022 World Series 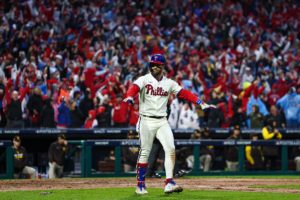 The Phillies started the 2022 season 22-29 under manager Joe Girardi. That, of course, wasn’t good enough and the veteran coach was sent packing. Philadelphia would go on to win 87 games and just make it into the National League playoffs.

Now, Philadelphia finds itself tied at one game apiece with the Houston Astros, a franchise that has reached four of the last six World Series. Houston won it all in 2017 and they are still a -170 favorite to capture their second title.

For Philadelphia, it is just the third trip to the World Series since 1994. To some, the entry may seem somewhat of a surprise. Make no mistake though, these Phillies are no underdogs. They were meant to be here.

The Phillies reached this year’s World Series by doing what MLB teams do in order to win a championship – spending money…lots of it.

Only three teams – the Yankees, Dodgers, and Mets – had higher payrolls than the Phillies $255 million this year. San Diego, the team Philadelphia beat in the NLCS, spent $237.7 million in an attempt to win a World Series.

Dave Dombrowski has spent his career building champions. The Phillies brought in Dombrowski, a seasoned MLB executive, in December of 2020. One of his first moves was to re-sign C J.T. Realmuto to a five-year, $115.5 million contract. The Phillies catcher has been a big piece of the puzzle this season. He hit .276 with 22 homers and 84 RBIs during the regular season.

After the Phillies missed the playoffs for a tenth consecutive season in 2021, Dombrowski went out and signed Kyle Schwarber (4 years, $79 million) and Nick Castellanos (5 years, $100 million). Don’t forget that the Phillies had inked former NL MVP Bryce Harper to a 13-year, $330 million contract in 2019, which at the time was the richest in baseball history. Harper was named the MVP of this year’s NLCS.

There were the additions of pitchers Aaron Nola and Zack Wheeler. Nola had a career-best WHIP of 0.961 and led the majors with an 8.1 K/BB ratio. Wheeler has a 1.78 ERA and a 0.51 WHIP in four postseason appearances this year.

The recipe for success in MLB appears to be linked to spending. All five of the top-spending teams in the majors advanced to the postseason. There are, however, teams that have shown that money doesn’t always buy happiness.

The Los Angeles Angels had the 10th highest payroll in 2022 ($189 million), but they were unable to develop around two generational players in Mike Trout and Shohei Ohtani. The Tampa Bay Rays, who regularly rank among the league’s most frugal teams ($104.3 million in payroll, 25th place), are perennial contenders. The Cleveland Guardians had the 28th highest payroll ($82.1 million) this season and won the AL Central before forcing the Yankees to play five games in the ALDS.

Despite having a payroll that is annually among the highest in baseball, both the Dodgers and Yankees have just one World Series win in the last 13 seasons. The Dodgers played for the title in three of four seasons between 2017 and 2020 but have just one win to show for all their spending.

Some franchises, like the Yankees and Cardinals, have discovered a winning formula over the course of 162 games, but no one has yet worked out how to reliably win a seven-game series. The Phillies, who are a +120 underdog in tonight’s Game 3 in Philadelphia, are hopeful the spending formula works for them. They intend to stick to the plan for a while as they have the second-highest amount of contract commitments going into the upcoming free agency extravaganza.