How and Why You Should be Betting the NFL Second Half 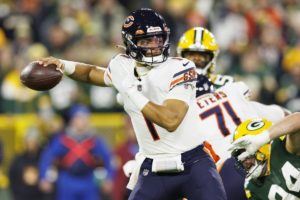 If you are not betting the second half of NFL games, you should be. Sportsbooks are at a huge disadvantage when it comes to second half markets. Smart bettors can exploit these inefficiencies and find some great value.

The key to winning NFL second half bets is understanding how it all works. With some knowledge of what to look for, bettors can prosper from betting the second half.

When the first half of an NFL game is complete, sportsbooks immediately get to work on establishing second-half lines and odds. The problem that sportsbooks have is that they don’t have much time to work with.

By rule, halftime of an NFL game is 13 minutes long. At the most, sportsbooks might have 15 minutes total to post all their lines and odds for each game’s second half. With that limited amount of time, sportsbooks are more likely to make a mistake. That’s why NFL bettors should be betting this market.

There are a few different strategies second half bettors can use to succeed.

Look for Big 2nd Half Underdogs

In examining NFL games since 2003, second half underdogs win about 50 percent of the time against the spread (1631-1628-115). Now, breaking that down and looking for big – aka +7 or greater – underdogs produces some valuable results.

Big, in this case, will refer to halftime leads of 14 points or more. In situations like this, the thought is this. The first half team takes its foot off the gas and regresses some in the second half. The losing team makes some halftime adjustments and gets back in the game, right?

If you are going to bet second half markets, you will need to understand that in big halftime lead situations this is not the case. Teams with big first half leads usually keep pouring it on in the second half.

Favorites Losing at the Half

This should make sense. Good teams are pregame favorites of 10 or more for a reason. They are usually better at making halftime adjustments. In the postseason, this is an even stronger bet. Since 2005, teams in this category are 38-25-3 giving them a winning percentage over 60 percent.

If you are thinking of betting the second half of NFL games, you have good reason to do so. The market is less efficient and knowing what to look for can help you take advantage of favorable second half odds.